Manila Bulletin writer and prominent social media personality, Krizette Laureta Chu made an interesting expose about Sharon Cuneta’s alleged lies as she shared some evidences that Sen. Kiko Pangilinan’s color during his first run as senator in 2001. 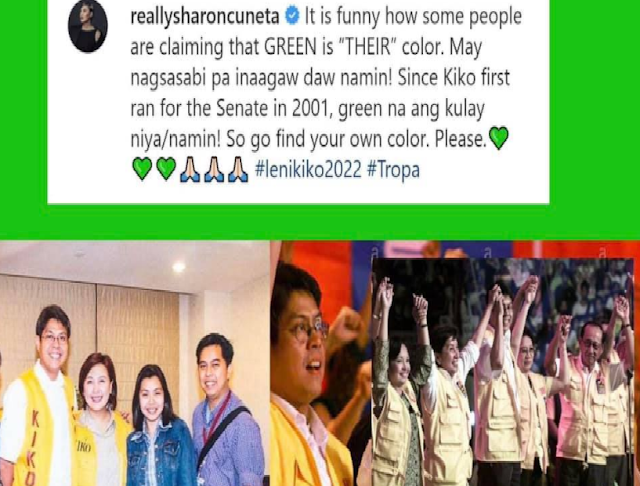 Sharon Cuneta claimed earlier through her official social media account that Sen. Kiko Pangilinan who is now running for Vice President has always been in green even when he first ran as Senator in 2001.

The veteran actress and former recording artist wrote the following on social media “It is funny how some people are claiming that GREEN is “THEIR” color. May nagsasabi pa inaagaw daw namin! Since Kiko first ran for the Senate in 2001, green na ang kulay niya/namin! So go find your own color. Please.”

Krizette Laureta Chu exposed the hypocrisy and lies of Sharon Cuneta by sharing some photos of Kiko Pangilinan wearing the yellow color of the Liberal Party and not the green color his wife claimed on social media.

According to Chu, it is indeed clear that during the 2001 elections, Kiko Pangilinan was not wearing the green color claimed by Sharon Cuneta but the yellow color of the administration party during the time of former Pres. Gloria Macapagal-Arroyo.

Sharon: “Kiko has always been in green even when he first ran as Senator in 2001.”

Kiko as a neophyte: Not in green

(PS: I’ve been poring over old photos. He just wore and used green during his stint in Agri during Pnoy’s admin. But it wasn’t his color.)

Netizens also reacted with the recent discovery of Krizette Chu exposing the lies of Sharon Cuneta after the stumbled upon the post of the Manila Bulletin writer.

Most of the netizens who discovered the lies presented by Sharon Cuneta castigated the couple for being an alleged liar in the claims about the color used by Kiko Pangilinan during the 2001 election.

Rosemarie Benolirao: Ang color ba ng suot ni kiko green? Green is green and yellow is yellow. Pati mga estudyante nililito nyo. Are you setting a good example? Kindergarten Kids now a days are smarter than you since they know how to differentiate green from yellow.

Bibby Buncalan: Sharon so maingay….. Helen Gamboa Sotto is quiet lang… Helen is an example of a great lady… supports her husband but never reacts to anything said about Tito. Sharon should learn a lesson or two from Helen. Just saying…