Ukraine Russia news live: Putin ‘mad in his self-isolation’ as he blames West for war

Ukraine Russia news live: Putin ‘mad in his self-isolation’ as he blames West for war 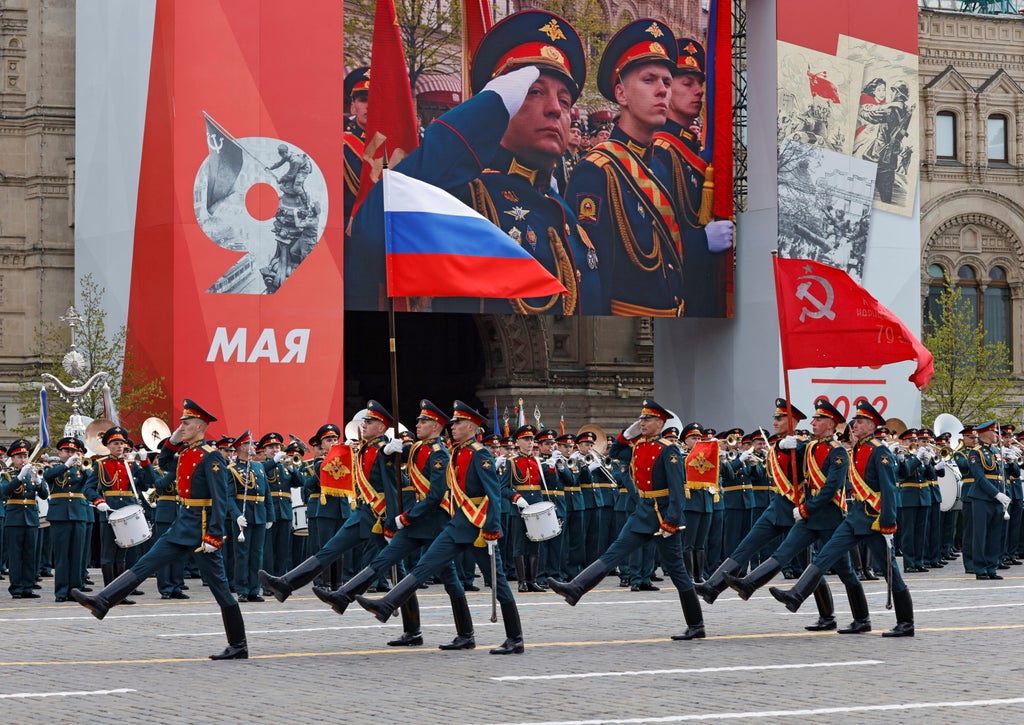 Vladimir Putin is “mad in his self-isolation” as he seeks to portray his invasion of Russia in a positive light during his Victory Day speech, says Kira Yarmysh, an exiled spokesperson for jailed opposition leader Alexei Navalny.

Her reaction comes after Mr Putin delivered a speech at a military parade in Moscow to commemorate the 77th anniversary of the Societ Union’s victory over Nazi Germany. As he addressed the nation, the Russian president suggested that troops were “defending the motherland”.

During a speech at the National Army Museum, London, on Russia’s illegal and unprovoked invasion of Ukraine, British Defence Minister Ben Wallace said in response: “There can be no victory day, only dishonour and surely defeat in Ukraine… He (Putin) must come to terms with how he’s lost in the long run, and he’s absolutely lost.”

EU deal on Russian oil ban ‘could be reached this week’

“I think we could strike a deal this week,” Mr Beaune told LCI television, adding that French President Emmanuel Macron was due to talk to Hungarian prime minister Viktor Orban later in the day.

Hungary is the most vocal critic of this planned embargo on Russian oil.

The British defence ministry says Russia’s battlefield losses and demonstrable operational failings stopped Vladimir Putin from announcing a success in the war at the Victory Day parade on Monday.

“Russia’s underestimation of Ukrainian resistance and its ‘best case scenario’ planning have led to demonstrable operational failings, preventing President Putin from announcing significant military success in Ukraine at the 9 May Victory Day parade,” the ministry claimed in its latest intelligence update on Tuesday.

It added that Russia’s invasion plan is “highly likely to have been based on the mistaken assumption that it would encounter limited resistance and would be able to encircle and bypass population centres rapidly”.

As a result, the Russian troops attempted to carry out the “opening phase of the operation with a light, precise approach intended to achieve a rapid victory with minimal cost”.

This miscalculation led to unsustainable losses and a subsequent reduction in Russia’s operational focus, the British defence ministry said.

A shopping mall and two hotels were among the buildings flattened in Odesa on Monday after coming under attack from Russian missiles, officials said.

The strikes involving three Kinzhal missiles, Russia’s new hypersonic missiles, were fired on the southern port city at around the same time as Vladimir Putin led grand celebrations in Moscow for Victory Day, commemorating Russia’s victory over Nazi Germany and the end of the Second World War.

The hypersonic missiles were fired from a plane and hit a “tourist infrastructure target”, said Sergey Bratchuk, spokesperson for the Odesa regional military administration.

Preliminary visuals from the site showed rescue workers sifting through piles of rubble even as smoke continued to emerge from the wreckage.

At least one person was killed and five were injured when a total of seven missiles hit a shopping centre and a depot, Ukraine‘s armed forces said on Facebook.

Evidence of Ukrainians being moved into Russia ‘against their will’, says US

Pentagon officials say they have evidence that Ukrainians are being moved from their country into Russia “against their will”.

However, Mr Kirby did not share details on the numbers of people involved and how many camps there were or “what they look like”, upon being asked to share further information at a briefing.

“I don’t think we have that level of detail but we do have indications that Ukrainian are being taken against their will into Russia,” Mr Kirby said.

Announcing a fresh batch of sanctions on Russia, Japan has frozen the assets of more Russian individuals and banned the export of cutting-edge goods used by groups in Moscow, including scientific research institutions.

This is in continuation with economic sanctions imposed by Tokyo, in a show of solidarity with Kyiv and western nations, seeking to force Russia into ending its invasion.

Just a day earlier, Japanese prime minister Fumio Kishida had said that the Asian country will slowly wean off Russian oil imports in a show of unity with the Group of Seven nations’ efforts to respond to the Ukraine crisis.

“It’s an extremely difficult decision for a country that mostly relies on energy imports, including oil. But G-7 unity is most important right now,” Mr Kishida said on Monday.

A top Russian official has said the country won’t proactively shut down its embassies in Europe even as several countries in the continent have backed the sanctions and restrictions brought by western nations.

“Therefore, we believe that the work of diplomatic representative offices is important.”

This comes after the Russian envoy to Poland was covered in red paint in Warsaw by people protesting against Moscow’s war in Ukraine. The anti-war protesters were chanting “fascists” and “murderers”.

The Russian ambassador had gone to lay flowers at the Soviet Military Cemetery to mark the 77th anniversary of the victory over Nazi Germany in the Second World War.

Moscow can show anything in propaganda, says Zelensky

Ukrainian president Volodymyr Zelensky said the main topic being discussed in European capitals is the price of peace that needs to be paid to stop the war started by Russia.

“Usually on 9 May, Europeans recalled the price of peace that was paid by all the nations of our continent 77 years ago. They talked about how to prevent the recurrence of such a terrible war,” Mr Zelensky said, adding that now everything has changed.

“In European capitals, the main topic is the price of peace that will have to be paid to stop the war unleashed by Russia. And also the price for Russia for bringing the evil of total war of destruction of our people to Europe again,” he said in his nightly address.

This is also the main topic in Moscow now, Mr Zelensky said, adding that “they can show anything in propaganda – let it be. And make any political statements.”

“But the reality cannot be changed. Reality requires peace. And the only culprit that peace has been destroyed is and will be the Russian state. This is a historical responsibility of Russia,” he added.

As Russia continues to blockade Ukraine’s key port of Odessa, president Volodymyr Zelensky warned that the food crisis in other parts of the world could escalate as a result.

“Without our agricultural exports, dozens of countries in different parts of the world are already on the brink of food shortages. And over time, the situation can become downright terrible,” Mr Zelensky said in his nightly address.

He referred to the visit made by the European Council’s president Charles Michel to Odessa on Monday.

“Politicians are already discussing the possible consequences of the price crisis and famine in Africa and Asia. This is a direct consequence of Russian aggression, which can be overcome only together – by all Europeans, by the whole free world. It can be overcome by putting pressure on Russia, by effectively forcing Russia to stop this disgraceful war,” the Ukrainian president said.

‘All I heard was lies’: Ukrainians find no answers in hollow Putin speech

Coming at a critical juncture in the Ukraine war, Vladimir Putin’s speech on Russia’s Victory Day yesterday was expected to carry major announcements to reflect the volatile situation.

Some even predicted an order of general mobilisation, or perhaps a declaration of a full-scale war. The Russian government has continued to call the conflict a “special military operation”.

But Mr Putin’s address did not reveal any clues on what happens next in the conflict. On the contrary, he compared the fighting taking place to the Second World War, when 27 million Russians died defeating Hitler’s Germany.

Ukrainians sitting on the other side of Moscow’s border said they only heard lies and no explanations.

“What Putin had to say was personal for many of us here in Ukraine. I thought I might hear something from Putin which would help me try to understand why the Russians behaved in this barbaric way,” said Ms Fedorenka who watched and listened to Mr Putin’s speech to try and understand his motivation.

Pulitzer Prizes award special citation to journalists of Ukraine for ‘courage, endurance and commitment’ during war

The journalists of Ukraine were awarded a special citation for coverage of the Russian invasion, as the Pulitzer board paid homage to the 12 journalists who have been killed covering the Ukraine war this year.

The annual Pulitzers are the most prestigious awards in US journalism, with special attention often paid to the public service award.

The Pulitzer board made note of the “challenging and dangerous times for journalists around the world,” noting 12 journalists killed covering the Ukraine war, eight Mexican journalists murdered this year, and other cases of assault and intimidation against journalists in Afghanistan and Myanmar.

The special citation for journalists of Ukraine applauded their “courage, endurance and commitment to truthful reporting during Vladimir Putin’s ruthless invasion of their country and his propaganda war in Russia.”