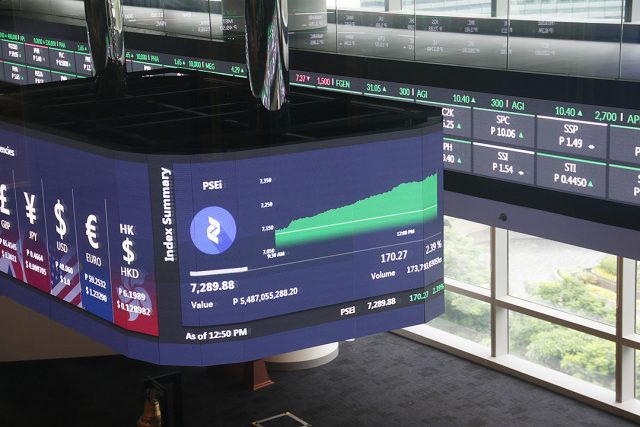 SHARES closed higher on Monday on bargain hunting after five consecutive days of decline and as Metro Manila remained under Alert Level 1.

“The local market bounced back this Monday…as investors hunted for bargains from its preceding five-day decline. The keeping of the National Capital Region and other areas in the Philippines under coronavirus disease 2019 (COVID-19) Alert Level 1 status, which would help in sustaining the vibrant flow of consumer and business activities in the country, also helped in Monday’s rally,” Philstocks Financial, Inc. Senior Research Analyst Japhet Louis O. Tantiangco said in a Viber message.

On Sunday, Malacañang announced that Metro Manila will remain under Alert Level 1 from May 16 to May 31 despite the detection of cases of the more infectious COVID-19 Omicron subvariant in the country.

“The Bangko Sentral ng Pilipinas (BSP) is set to hold its third rate-setting meeting on May 19 (Thursday). The street is mixed as to whether or not the central bank will keep the key policy rate untouched at 2%,” Regina Capital Development Corp. Head of Sales Luis A. Limlingan said in a Viber message.

With faster-than-expected GDP growth seen to put upward pressure on inflation, some market players are pricing in a hike by the BSP as early as its meeting on Thursday.

A BusinessWorld poll of 17 analysts conducted last week showed they are divided on the BSP’s next move, with nine betting rates will remain unchanged, while eight are expecting a 25-basis-point hike.

Economic growth in the first quarter accelerated by a higher-than-expected 8.3% annually. It was a reversal from the 3.8% decline in the same period last year and faster than the 7.8% growth logged in the final three months of 2021. The latest GDP growth print is also within the 7-9% target of the government.