Former Assistant Secretary of the Department of Transportation under the Duterte Administration, ASec Goddes Hope Libiran, called out the newspaper she is currently writing with, The Daily Tribune for their alleged mischievous caption about the rant of Ogie Diaz against supporters of BBM-Sara. 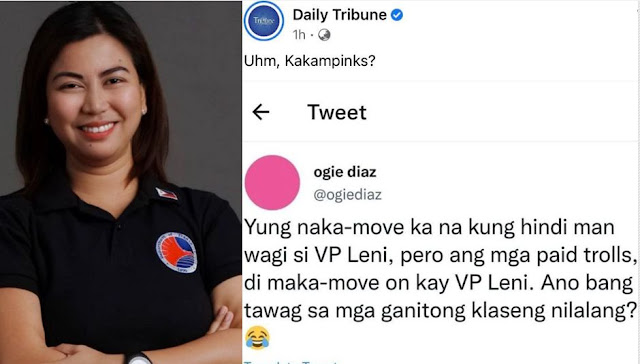 On her official Facebook account, Libiran respectfully suggested to Mr. Ogie Diaz to give all the BBM-Sara supporters time to recover from the insults thrown at them, particularly from critics like him and from some of the rabid and very passionate supporters of VP Leni Robredo.

She said that it is just natural for people to not easily forget when their hearts and person are being spit upon.

The former DOTr official also stated that even people with amnesia, tends to resist and fight.

But, seriously Sir Ogie, I respectfully suggest that you also give time for BBM-Sara supporters to recover from the mockery, name-calling, elitism, and vitriol they experienced from some supporters of VP Leni.

Netizens also joined the conversation as they shared their sentiments and comments on the latest statement released by ASec Libiran against the rants of Ogie Diaz.

Here’s Some of the Comments Posted on FB:

Rotarian Fogs: Well its true din… for the kakampinks its personal but for me its ABL. I dont mind being called bobo, or boboto sa magnanakaw. Because if people would know my credentials they would know that I have basis for my vote. Voting for BBM-Sarah is just Math and Social science combined, on the later voting for Leni is emotion. I am excited for a President and Vice President who works hand in hand during this trying times.

Arild Edwin: Many BBM supporters (even I) have been silent just to avoid the insults and bad-mouthing of the other party’s avid fans (many of them ain’t voters yet). Can’t blame if the 31 million Filipinos are making some noise and have broken their silence with the victory of our upcoming President.

Gino Cristobal: To Ogie Diaz, stop acting like a sore loser. Other people are still celebrating for the BBM-Sara win and they are 31 Million strong which is more than half of the voting population.