A lucky individual got a surprise of his life as he was able to discover an 18-carats gold necklace inside an Ukay-ukay jacket. 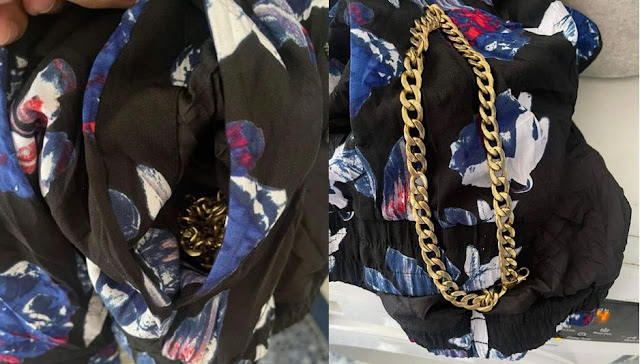 According to Facebook user Alvin Piñero while doing his usual habits of buying from ukay-ukay store, he chose an ordinary jacket worth around P180.00 only but during the time when he was ready to wash the bought ukay-ukay he got the surprise of his life.

Netizen Alvin stated on his social media post that he was used to wash first everything that he bought at any ukay-ukay store.

When examining the newly-bought ukay-ukay jacket he discovered an elegant thing inside, a gold necklace. He just did the usual things while washing, examining every pocket to get rid of any papers or trash inside the pockets.

In order to prove his doubts about the said necklace, he brought it at the nearby Palawan Pawnshop and tried to appraise the said lucky discovery.

Based upon the appraisals made by the pawnshop, it was found out that the necklace is indeed not fake and it weigh around 87 grams and the said necklace was an 18-carrat gold jewelry.

When asked about how much it worth, if he will pawn the said jewelry, the pawnshop responded that they will accept it at P93,700 if he is interested.

Netizen Alvin then posted his experience on his personal Facebook Page, somebody told him that the appraisals made by Palawan Pawnshop was so low, so he tried to once again let another pawnshp appraised his newfound wealth and based upon the appraisals made by Cebuana, the jewelry could be appraise worth P278,000.