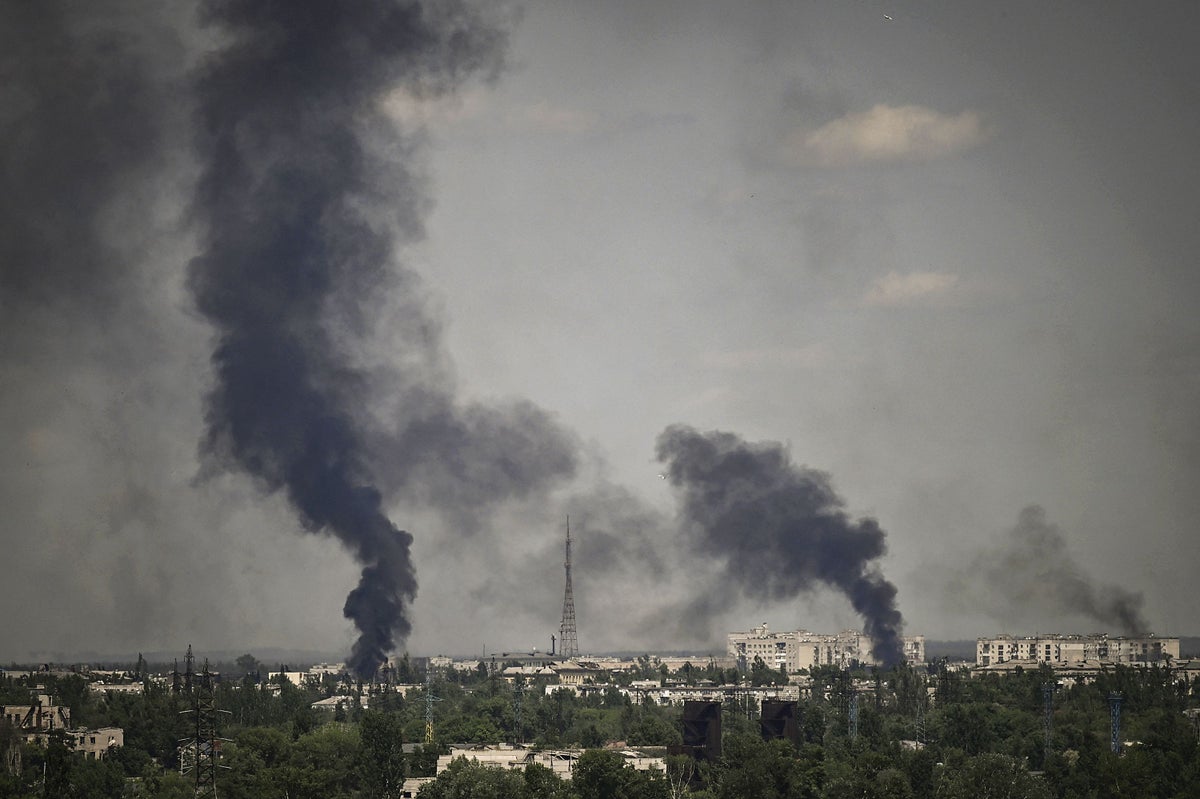 Russia’s economy is reportedly on track to experience its deepest recession since the fall of the Soviet Union as it grappes with the impact of sanctions over its war in Ukraine.

Government analysis has found it is facing a £256bn hit, with GDP set to shrink by 15 per cent this year, according to The Telegraph.

Russia suffered another blow to its economy this week when the European Union decided to ban nearly all oil imports from the country in response to the invasion.

Other nations and companies have moved to cut ties with Moscow and its key industries as the war in Ukraine wages on.

UK defence authorities said on Wednesday Russian forces had pushed closer to the centre of the Sieverodonetsk as the fighting intensified over the last two days.

“Over half of the town is likely now occupied by Russian forces, including Chechen fighters,” it said.

Wheat can’t be ‘weapon of war’, Pope says as he urges lifting of Ukraine block

Pope Francis appealed to authorities on Wednesday to lift a block on exports of wheat from Ukraine, saying the grain could not be used as a “weapon of war”.

Many millions of people, particularly in the world’s poorest countries, depend on wheat from Ukraine, the pope told a general audience of thousands of people gathered in St. Peter’s Square, calling for the block to be lifted.

The United Nations, which says a global food crisis is worsening, is trying to broker a deal to unblock Ukraine’s grain exports, though Western leaders have blamed Russia for holding the world to ransom by blockading Ukrainian ports.

“The blocking of exports of wheat from Ukraine is very worrying because the lives of millions of people depend on it, especially in poorer countries,” the pope said.

“I make a heartfelt appeal so that every effort is made to resolve this problem, to guarantee the universal right to nutrition. Please! Do not use wheat, a basic foodstuff, as a weapon of war,” he added, to applause from the crowd.

Mr Scholz told politicians the government has decided to provide Kyiv with IRIS-T missiles developed by Germany together with other Nato nations.

The announcement comes amid claims at home and abroad that Germany has been slow to provide the embattled country with the weapons it needs to defend itself against Russia, which invaded on February 24.

Even as the European Union decided to reduce Russian crude oil imports by 90 per cent by the end of the year, Italy has become the only country in Europe to increase them, an unintended consequence of EU sanctions against Russia.

Meant to punish Russia for invading Ukraine, the EU oil embargo is now putting at risk one of Italy’s largest refineries, located in Sicily, which would deal an economic blow to the depressed region’s economy.

Italy agreed with its EU partners to cut Russian crude imports by 2023, a move that premier Mario Draghi called “a complete success,” that “just a couple of days ago wouldn’t have been believable.”

But Rome also has to deal with the fate of the refinery in Sicily owned by Russia’s Lukoil. As a result of previous sanctions against Russia, ISAB Srl has paradoxically gone from processing 15 per cent of Russian crude to 100 per cent.

Russia is reportedly set for its deepest recession since the fall of the Soviet Union.

The country is facing a growing number of sanctions over the invasion of Ukraine, with the European Union dealing a further blow this week as it vowed to ban nearly all oil imports.

Moscow’s economy looks set to face a £256bn hit from sanctions, with GDP shrinking 15 per cent this year, according to The Telegraph.

Here is the UK’s latest assessment on the situation in Ukraine:

The Ukraine’s armed forces said that the Russia has fired a Su-35 missile at Bilopillya, Sumy oblast.

“Artillery fire damaged in the area of the settlement of Seredyna-Buda, Sumy oblast,” the Ukrainian armed forces said in its latest update on Wednesday morning.

In the Sievierodonetsk direction, “Russian aggressor carried out assault operations in the northern, southern and eastern districts of the city of Severodonetsk,” the armed forces said.

“In the past 24 hours, nine enemy attacks have been repulsed in Donetsk and Luhansk, two tanks, 13 artillery systems, eight armoured fighting vehicles and six enemy vehicles have been destroyed. In the South, in the Kherson and Mykolaiv oblasts, the losses of the Russian occupiers, in addition to military equipment, amounted to about 70 people,” the latest update from the military read.

A family who was forced to flee Ukraine has been reunited with their dog after he spent two months quarantining in the UK.

Mike, his wife Alla and mother-in-law Valentyna travelled from Kyiv to north-east England with Archie, who helped keep their spirits up on the 2,000-mile journey.

But after arriving in the UK, their pet was quarantined for eight weeks.

“He kept us sane and amused, it felt like he saved us in a way,” Mike said of Archie.

“Because of the quarantine, it felt like we couldn’t save him and we let him down.”

A family who fled Ukraine have been reunited with their dog after he spent two months in UK quarantine.Mike, his wife Alla and mother-in-law Valentyna travelled from Kyiv to north-east England with Archie, who helped keep their spirits up on the 2,000-mile journey. But after arriving in the UK, their pet was quarantined for eight weeks.“He kept us sane and amused, it felt like he saved us in a way,” Mike said of Archie. “Because of the quarantine, it felt like we couldn’t save him and we let him down.”Click here to sign up for our newsletters.

Volodymyr Zelensky reiterated the war casualties among his troops and said that the besieged country is losing 60-100 soldiers every day in combat.

He added that country under invasion is facing the most tense situation in the east of Ukraine and southern Donetsk and Luhansk.

Soon to mark it’s 100th day, the Russia’s invasion of Ukraine has shaken Europe’s post-Second World War order and exposed the complacency of peace with it.

After all, it was the war we were told would never happen, or one which would take just a few days until the rapid surrender of Kyiv.

It has changed the widely-held view that Vladimir Putin was some sort of admirable autocrat, instead of the warmongering nationalist he is. His country is still fearsome but his army, once thought of as a machine which could march across Europe in days, is now derided as one which seems as if it will spend its life fighting in the Donbas.