But CAN the United States defend Taiwan?

But CAN the United States defend Taiwan? 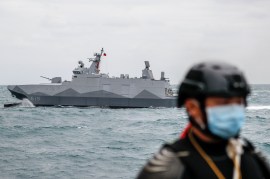 President Joe Biden has yet again stated that if China attacked Taiwan to reunify what Beijing sees as a renegade province with the mainland, the United States would come to Taiwan’s military defense. White House staff has again followed up these off-the-cuff presidential comments with a “clarification” that in fact, strategic ambiguity remains American policy. Somewhat oxymoronically, the United States seeks to be crystal clear about being intentionally unclear about what we would do (evocative of British policy just before World War I on whether London would come to Paris’s aid, should France be attacked). The goal is to avoid emboldening Taiwan to provoke China even as we try to deter China in the event it does feel provoked. Quite the balancing act.

But here’s the real rub: Saying we WOULD defend Taiwan militarily does not mean we COULD do so successfully. These doctrinal debates over strategic ambiguity versus strategic clarity seem strangely disconnected from military reality.

America’s policy of strategic ambiguity was born during the Cold War, when it was a simple fact that the United States enjoyed overwhelming military dominance against China in the waters and airways of the western Pacific. Even though Taiwan was 100 miles from China and thousands of miles from the United States, U.S. dominance in advanced air and naval weaponry meant that we almost surely could have come to Taiwan’s defense and prevailed. Given China’s dramatic military modernizations of recent times, the situation is now much more complex. Recent analysis that I have done at Brookings indicates that especially for certain types of blockade scenarios by which China might seek to squeeze Taiwan into submission, the United States and its allies might still win a war in which they sought to break the blockade. But we also might lose it.

In general terms, a possible naval blockade of Taiwan offers advantages to China. For this scenario, unlike that of an attempted invasion, trends in technology favor rather than hurt China, since it would be the actor threatening large military objects like ships and airfields and ports. To minimize China’s own vulnerabilities, People’s Liberation Army Navy attack submarines might be the principal assets employed, rather than surface ships or aircraft. Cyberattacks would likely support the physical operation. Beijing might escalate to the use of land-based missiles and aircraft later in a battle, depending on initial results. And all of these operations, and the effectiveness of their counters, would surely fluctuate over time. The opposing sides would seek the best places to operate (given sonar conditions and other considerations) and would vary the intensity of their efforts as a function of their effectiveness, and of the interplay between military operations and broader political dynamics in Beijing, Taipei, Washington, Tokyo, and beyond.

My modeling strongly suggests that the outcome of such a conflict over Taiwan is inherently unknowable. That is true, I believe, even if the battle is assumed to remain within reasonably specific boundaries of possible escalation.

I cannot prove my conclusion beyond any reasonable doubt with simple models that depend on unclassified and potentially dated input data to generate their results. But it is doubtful that planners on either side with access to more complex models and more current data can do much better. There are simply too many major technical uncertainties — about the performance of command and control systems, undersea warfare, and possibly missile defenses, in addition to questions about resilience and reparability of the in-theater ports and runways upon which U.S. operations would depend — to permit reliable prognostication. The possibility of escalation to wider or even nuclear war of course reinforces these specific uncertainties about a more concrete scenario centered on a blockade.

The best that modeling can do to handle these variables is to create reasonable boundaries within which actual scenarios might generate their actual results. So long as those boundaries are difficult to dismiss, and include cases in which both sides win, anyone entering a war confident of knowing the winner in advance has a high analytical threshold to establish. Thus, although it is possible that planners on one side or the other (or both) could develop plausible theories, and concepts, of victory — perhaps akin in some ways to Germany’s war plans against France and Britain of 1914 and 1940 — defeat must be considered an equally plausible outcome. This conclusion should be sobering for any leader who might consider risking such a conflict in the years to come.

The implications of a responsible approach to modeling and analyzing warfighting scenarios are important not only because they should affect leaders’ assessments of the risk of war, but also for purposes of U.S. and partner force planning. Model results might for example suggest certain modifications to or modernizations of key assets to reduce vulnerabilities, especially in command and control, but also in supply and maintenance, in ordnance sustainability, and in the adequacy of anti-submarine warfare assets including planes, ships, and submarines within the U.S. military force structure. But even more, the implications should affect how all parties think about crisis management and any use of force. China should not see such limited-force scenarios as somehow safe or controllable; the United States should not necessarily respond to a Chinese blockade with a prompt counterblockade operation, if it can devise alternative approaches.

The United States should respond to any Chinese attack, yes — in that sense, there should not be strategic ambiguity — but rather than promise to respond militarily, we should seek to develop a wider range of response options that include the use of economic, diplomatic, and other tools. This approach has the benefit of being consistent with the Defense Department’s concept of “integrated deterrence,” and of not promising that we would effectively defend Taiwan when in fact it may be beyond our power to do so.