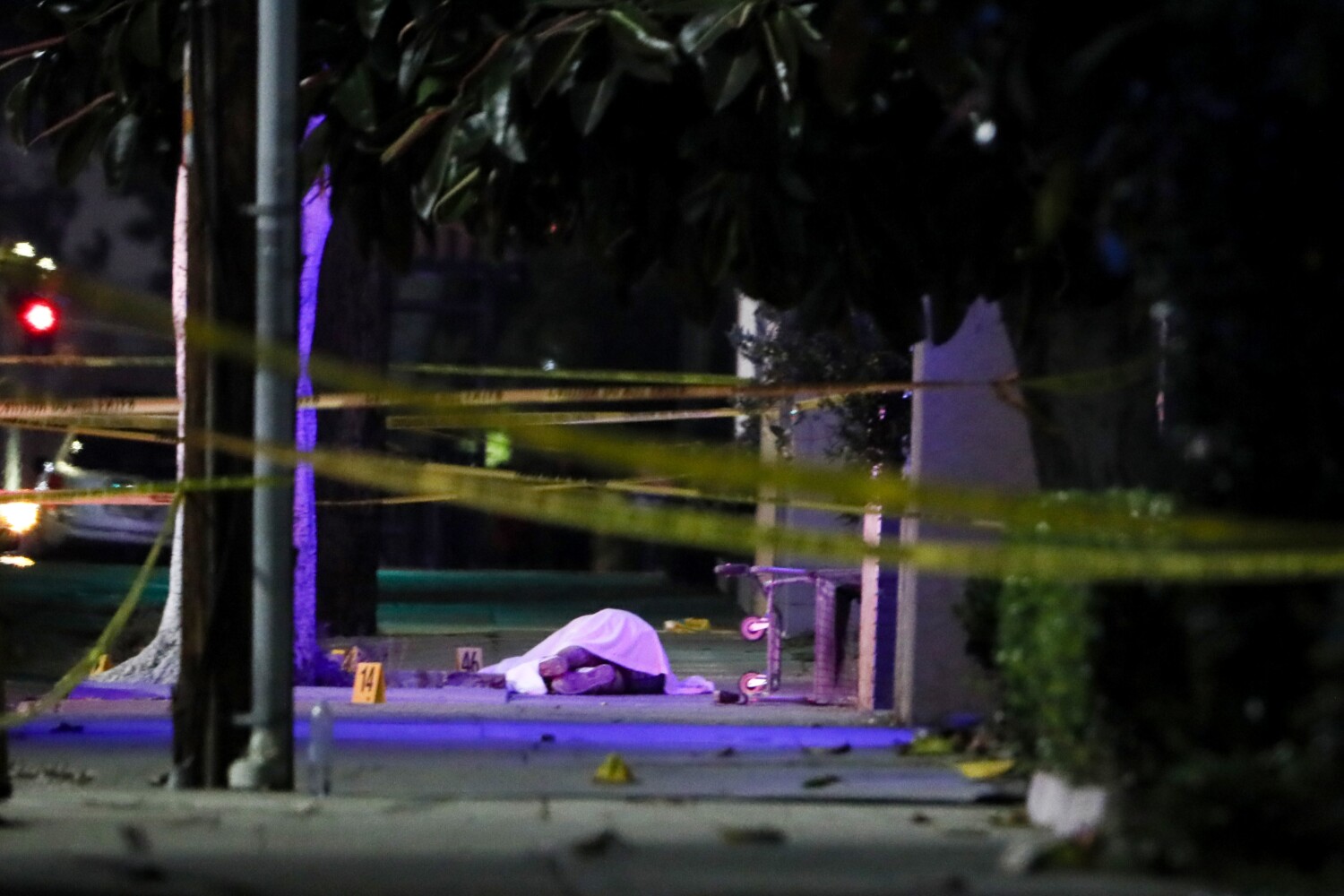 One a veteran officer and the other a relative rookie, they were united by a drive to serve the city that raised them.

Cpl. Michael Paredes and Officer Joseph Santana — the El Monte police officers killed in a shootout at Siesta Inn on Tuesday after responding to a call about a possible stabbing — left behind wives and children and a hometown in mourning.

“They’re El Monte homegrown,” said Mayor Jessica Ancona, who knew both officers, as she fought back tears. “They’re our boys.”

Justin Flores, 35, who allegedly fired at the officers, was on probation for a gun charge at the time of the shooting, court records show. In an interview, Lynn Covarrubias, Flores’ mother, confirmed that her son had been killed by police at the motel.

Paredes, 42, started his law enforcement career as a cadet with the El Monte Police Department and was sworn in as a full-time officer in the summer of 2000.

On Facebook, his sister had changed her profile picture to an image of a badge — No. 565. He is survived by his wife, daughter and son, according to a joint statement from the city and police department.

After graduating from El Monte High School, Santana, 31, worked as a maintenance employee with the city of El Monte for six years before becoming a deputy sheriff in San Bernardino County, according to the joint statement. He stayed there for about three years, joining the El Monte police force less than a year ago. Santana is survived by his wife, daughter and twin boys.

On Wednesday, several people left comments on a photo Santana posted on Facebook a year ago that showed him dressed in a crisp white shirt and holding a toddler.

Congratulations guys, read a comment from a year ago.

God rest his soul, thank you for your service sir.

Prayers to his wife, children, friends and family.

“They were good men,” said Capt. Ben Lowry, the acting chief of the El Monte Police Department. “These two heroes paid the ultimate sacrifice today. They were murdered by a coward.”

What led up to the shootout and how it unfolded remained unclear on Wednesday.

Upon arriving at the motel, the officers were “immediately taken under gunfire,” according to the joint statement released by the city and police.

Capt. Andrew Meyer, who leads the Los Angeles County Sheriff’s Department’s Homicide Bureau, said that officers responded to a call for a possible stabbing, confronted Flores in a motel room and then fired their weapons.

Flores ran out of the room and into a parking lot, where the officers fired again, Meyer said, noting that investigators on Tuesday night had interviewed a woman who was inside the motel room when the officers arrived. The woman, he said, had not been stabbed.

Paredes and Santana were so gravely wounded that officers rushed them to the hospital in a patrol vehicle rather than waiting for an ambulance, a law enforcement source said. Both died at L.A. County-USC Medical Center.

Flores was pronounced dead at the scene and, according to Meyer, a gun was recovered next to his body.

A block from the single-story motel, Mayra Lomeli was grabbing an early dinner with a friend at El Perico Market at around 4:30 p.m. when she heard three gunshots. She dropped the tostada she was holding and crouched under a table, then got up and sprinted toward the door to lock it.

From his apartment nearby, Juan Hernandez recalled hearing six shots, a pause and then at least a dozen more shots in quick succession. He rushed to move his young children from the living room to a bedroom. He had grown accustomed to hearing gunshots at least once every few months, he said, and had often worried about stray bullets.

After moving his kids to the bedroom, he looked outside and saw a man lying on the pavement outside the motel. He believed it was a suspect and not an officer, he said, because the person wasn’t in uniform.

On Monday, a day before the shooting, Flores’ probation officer filed a request with the Los Angeles County Superior Court for a revocation hearing, listing the reason as “desertion.”

Two law enforcement sources familiar with the investigation said that Flores’ girlfriend had reported last week that he assaulted her, triggering a probation violation. But Flores, they said, hadn’t been taken into custody.

In an interview Wednesday, Covarrubias, Flores’ mother, said she didn’t know who was in the room with her son during the shooting. Her son’s wife had called Tuesday and said he was dead, but she didn’t believe it.

“Even the pictures they showed me of my son lying on the ground, I just thought, ‘Take him to the hospital. You can save him,’” she said.

Covarrubias described her son as a generous person who made a living as a carpenter and whom she hoped would be remembered for more than his final day.

Flores — who, according to two law enforcement sources, was a member of the Quiet Village gang — was arrested by sheriff’s deputies in March 2020 and charged with being a felon in possession of methamphetamine, a handgun and ammunition. In probation records, he is listed as a Pico Rivera resident.

As part of a deal with prosecutors, he pleaded no contest to being a felon in possession of a firearm, and prosecutors agreed to drop the other charges.

While the gun conviction alone could have sent him to prison for up to three years, by pleading no contest Flores was instead sentenced to two years’ probation and 20 days in jail, which he had already served, Deputy Dist. Atty. Larry Holcomb said, according to a transcript of the plea hearing.

He was ordered not to possess any weapons, including guns, ammunition and knives, the transcript shows. If he breached those terms, officials warned, he could be sent to prison for up to three years.

Flores had been prohibited from having a gun since he was convicted of first-degree burglary in 2011.

By Wednesday evening, traffic had returned to the streets near the Siesta Inn. Discarded bandages and a long crimson stain were visible near the entrance. Someone posed nearby for a macabre selfie.

Earlier in the day, a memorial of candles, flags and thank-you notes had begun to form outside El Monte’s City Hall and police department.

As Lupe Morse walked slowly toward the memorial Wednesday morning, her body coursed with dread.

“This is the walk you never want to make,” the 60-year-old El Monte resident said, “but you have to, because these two officers had our backs, and now it’s time to honor them.”

She carefully placed an arrangement of red roses, pink daisies and white lilies in front of a bronze eagle statue with a plaque reading, “IN MEMORY OF THOSE WHO SERVED.”

This moment felt deeply personal, Morse said, noting that she often worries about the safety of her husband, a sergeant in the Los Angeles Police Department.

“We’re a police family, and we know the dangers and the possibility of what happened yesterday,” she said. “My heart breaks for the families.”

Jimmy Tessier, a custodian in the local school district, arrived and stood silently before a plaque honoring two El Monte officers who had died from injuries sustained on the job — Anthony “Tony” Arceo in 1974 and Donald Ralph Johnston in 2002.

Tessier, who grew up in El Monte, said a small prayer and bowed his head.

“It was shocking to hear the news,” he said. “You just never expect that here in this community. We have our problems, of course, but not this.”