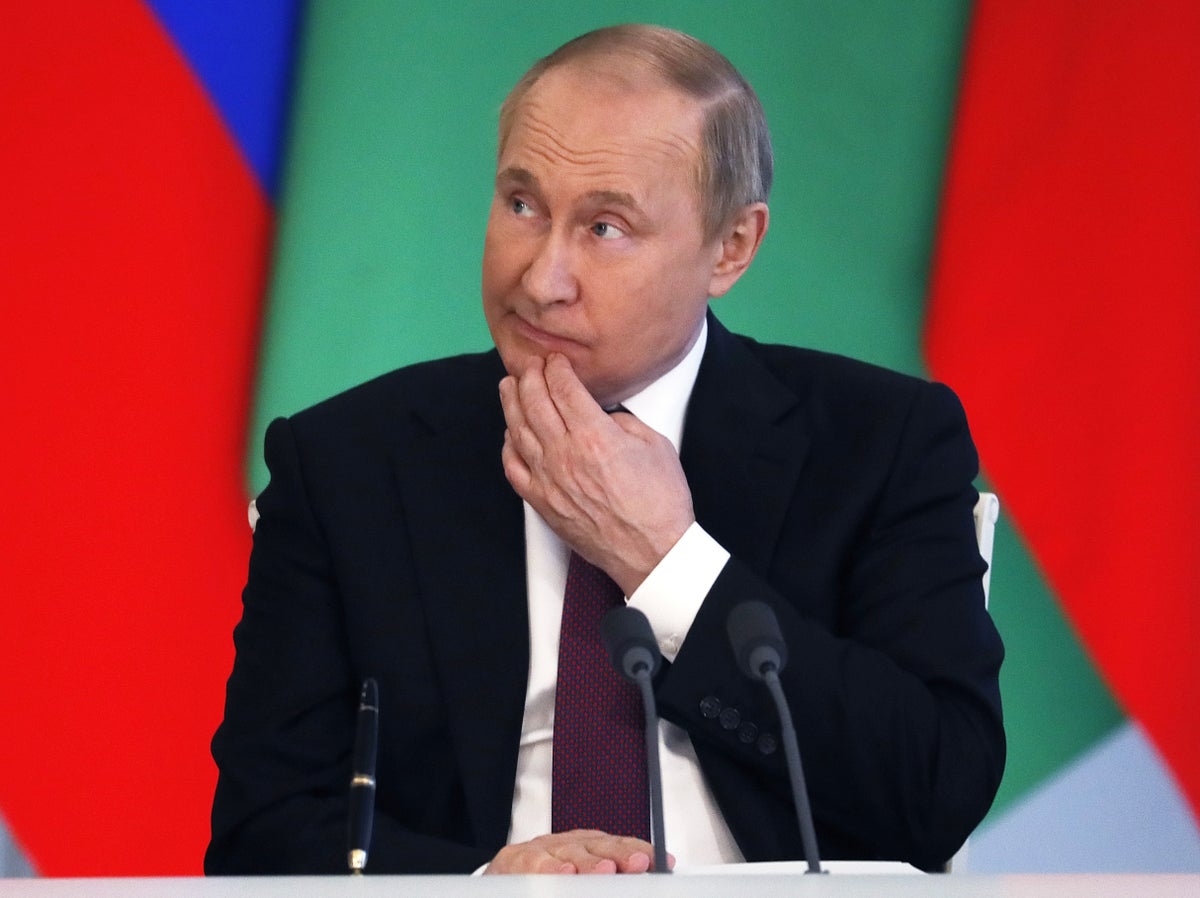 Ukraine ignored a Russian ultimatum to surrender the eastern city of Sievierodonetsk today.

Russia told Ukrainian forces sheltering in a chemical plant in the ruined Donbas city to stop “senseless resistance and lay down arms” from Wednesday morning, pressing its advantage in the battle for control of eastern Ukraine.

Ukraine said more than 500 civilians, including 40 children, remained alongside soldiers inside the Azot chemical works as the Russian bombardment of the surrounding city continued. Officials made no reference to the Russian ultimatum in remarks to the press on Wednesday.

Moscow had said it would let civilians evacuate the plant on Wednesday but Russian-backed separatists said Ukrainian shelling had scuppered the plan.

Meanwhile, Volodymyr Zelensky urged Brussels to let his country start on the road to membership of the European Union, warning that Russia’s territorial ambitions stretched from Warsaw to Sofia – though he did not provide evidence for the claim.

In a streamed speech to the Czech parliament, Mr Zelensky also called for more EU sanctions against Russia.

The US and European countries have pledged more weapons and military aid to Ukraine for backing the besieged country in its fight against Russian bombing and advances in the eastern Donbas.

Additionally, some European nations have also promised to supply aid to Ukraine after more than 45 nations came together in Brussels on Wednesday to discuss Ukraine’s security needs in defending itself against the Russian invasion.

Here’s what the fresh package to Ukraine includes:

— 18 tactical vehicles to tow the howitzers

— Spare parts and other equipment

— Germany will send three Multiple Launch Rocket Systems, which are very similar to the HIMARS. and guided munitions for the systems

— Canada and Poland will send artillery

Russia is facing difficulties in enforcing its rule in the territories it has occupied in Ukraine, according to the Institute for the Study of War.

“Russian authorities are continuing to face difficulties implementing their occupation agendas due to pro-Ukrainian pressure in occupied areas,” the latest report from the institute read.

It added that the Ukrainian Resistance Center has found unidentified “Ukrainian partisans targeted employees of the Russian Emergency Ministry in Mariupol on 9 and 11 June”.

The Center found that the Russian occupation authorities are “unable to open schools in occupied Berdyansk in Zaporizhzhia due to resistance from Ukrainian teachers, who are refusing to teach under Russian curricula.”

Zelensky thanks Biden for military aid: ‘Important for Donbas’

Volodymyr Zelensky thanked Washington in his nightly address late on Wednesday and said that Ukraine will look forward to the military aid promised by Joe Biden.

“I had an important conversation with US President Biden today. The United States has announced a new strengthening of our defence, a new $1bn support package including coastal defence, artillery, modern rocket systems. We will be looking forward to it,” Mr Zelensky said.

He added: “I am grateful for this support, it is especially important for our defence in Donbas.

“I am also grateful for the leadership in mobilising the help of all partners. There is also a new package of humanitarian support for Ukraine – a quarter of a billion US dollars,” Mr Zelensky said.

Mr Zelensky said that he discussed the latest developments on the ground with Mr Biden. “We also discussed with President Biden the tactical situation on the battlefield and ways to accelerate our victory. Sanctions, politics, economic cooperation – we are preparing for new steps,” he said.

‘Majority of Azovstal defenders are held in Donetsk’

Most of the Ukrainian defenders that had been holed up for months in the Azovstal steel plant are now in the Russian-occupied territory of Donetsk in eastern Ukraine, according to a senior official.

Oleksiy Danilov, secretary of Ukraine’s National Security and Defence Council, reportedly said – according to news website Ukrayinska Pravda – that the situation is “very delicate” for the many hundreds of defenders captured by Russia after a months-long siege of Mariupol.

Mr Danilov said on Ukrainian television: “Not just our country is involved in these processes – there are international institutions that are helping in this.

“The main thing here is not to do any harm. There is a lot that should not be said. We will wait for existing agreements to be fulfilled, and all the men and women who are in captivity today, who have made it through Mariupol, are sure to return alive and well.

“I emphasise once again: the main thing here and now is not to take unnecessary steps so that the aggressor does not accuse us of disrupting certain things. This is a very delicate matter.

“There is information that they are in the Donetsk region. I emphasise once again: the number of people is not 100 or 200 people, it is much more. And that’s why we can’t say for sure that everyone is there.

“We can definitely say that the vast majority, maybe all, are in the Donetsk region.”

Americans told to not visit Ukraine after captures

The White House is urging Americans not to travel to Ukraine after reports emerged that Russian forces had captured two US nationals that were fighting alongside Ukrainian defenders.

John Kirby, a National Security Council spokesperson, told reporters that if the reports are true, the US “will do everything we can” to get them back.

Robert Drueke, 39, and Andy Huynh, 27, were reportedly captured while fighting with Ukrainians in Kharkiv, and are said to be the first Americans to be taken prisoner by the Russians since the war began.

Two American men who joined Ukrainian forces to fight against the Russian invasion have reportedly been captured.

They are believed to be the first Americans to be taken prisoner by the Russians since the war began.

Robert Drueke, 39, and Andy Huynh, 27, were allegedly captured while fighting with Ukrainians in Kharkiv.

Boris Johnson told Volodymyr Zelensky he hopes progress could be made in the coming days on getting grain shipments out of the country, the British prime minister’s office said following a call between the pair.

Ukrainian grain shipments have stalled since Russia‘s invasion and ports blockade, shooting global prices for grains, cooking oils, fuel and fertiliser upwards. Russia today said it would allow Ukraine to safely ship grain from its ports but refused to assist Kyiv in clearing mines from the Black Sea.

International allies have been at pains to facilitate the shipments.

A spokeswoman for Mr Johnson’s office said in a readout of his call with the Ukrainian president: “The pair discussed Russia’s unforgivable blockade of Ukrainian grain, and the prime minister said he hoped progress on the issue could be made in the coming days.”

Former German chancellor Angela Merkel has said she has “nothing to apologise for” in her handling of Russia during her 16 years in office (Maryam Zakir-Hussain writes).

In her first major interview since leaving her post, Ms Merkel denied that she and others appeased Russian president Vladimir Putin, ultimately leading to the Ukraine invasion.

Speaking at the Berliner Ensemble theatre to German journalist Alexander Osang, she said: “I tried to work toward calamity being averted, and diplomacy was not wrong if it doesn’t succeed.

“I don’t see that I should say now that it was wrong, and so I won’t apologise.”

She called Putin’s invasion “a big mistake on Russia’s part” and said there was “no excuse” for the “brutal” attack, adding that “it is a matter of great sorrow” that her efforts “didn’t succeed” but she said, “I don’t blame myself now for trying”.

Joe Biden has now announced a further $1bn (£0.8bn) in weapons for Ukraine that sources familiar with the package said included anti-ship rocket systems, artillery rockets and rounds for howitzers.

In a phone call with Volodymyr Zelensky, Mr Biden said he told the embattled leader about the new weaponry.

“I informed President Zelensky that the United States is providing another $1bn in security assistance for Ukraine, including additional artillery and coastal defense weapons, as well as ammunition for the artillery and advanced rocket systems,” Mr Biden said in a statement after the 41-minute call.

The US last month approved $40bn in aid to Ukraine, $12.5bn of which is set for weapons.

Elsewhere, Washington has been pressing allies to increase their support for Ukraine. At a meeting of Nato defence ministers in Brussels today, US defence secretary Lloyd Austin urged his counterparts to pledge further supplies, saying: “We can’t afford to let up and we can’t lose steam. The stakes are too high.”

Ukraine ignored a Russian ultimatum to surrender the eastern city of Sievierodonetsk today.

The Donbas city, now largely in ruins, has for weeks been the main focal point of the war.

Russia had told Ukrainian forces holed up in the Azot chemical plant there to stop “senseless resistance and lay down arms” from Wednesday morning, pressing its advantage in the battle for control of eastern Ukraine.

Ukraine says more than 500 civilians, including 40 children, remain alongside soldiers inside Azot. Moscow had said it would let civilians evacuate from the plant on Wednesday but Russian-backed separatists said Ukrainian shelling had scuppered the plan, which would have involved taking people out towards territory they control.

The mayor of Sievierodonetsk, Oleksandr Stryuk, said Russian forces were trying to storm the city from several directions but the Ukrainians continued to defend it and were not totally cut off, even though all its river bridges had been destroyed.

Serhiy Gaidai, governor of the Luhansk region home to Sievierodonetsk, said Ukraine’s army continued to defend the city and to stop Russian forces from taking its twin city Lysychansk on the opposite bank of the Siverskyi Donets river.

The fall of the two cities would leave all of Luhansk in Russian hands.