Veteran political analyst and prominent supporter of the Dilawans, JC Punongbayan made some headlines on social after his controversial statement incoming Vice President Inday Sara Duterte. 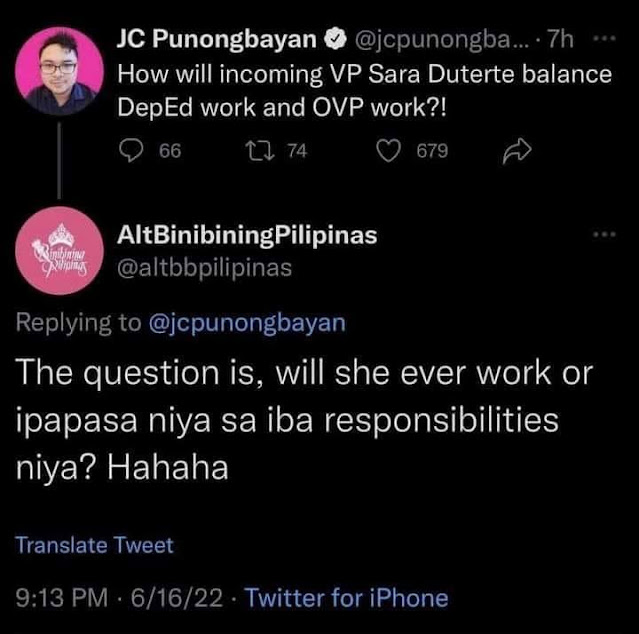 JC Punongbayan asked the general through his official Twitter account, on how the incoming Vice President could handle the Department of Education (DepEd).

The controversial statement of JC Punongbayan caught the attentions of netizens who wanted to reply to the latest controversy involing BBM and Sara Duterte.

The statement made by Punongbayan was met with criticisms as as the supporters of the incoming President and Vice President responded positively and lambasts JC Punong bayan’s statement.

According to veteran blogger and prominent defender of Duterte on social media, the question of Punongbayan is idiotic, and he knows the truth that there is no actual work being done by the Vice President except to wait of be designated by the admin to render government service.

Mark Lopez also noted that maybe JC Punongbayan just wanted to emphasize and made some hype that VP Leni Robredo worked hard but still failed to impressed the citizenry. All VP Leni did was to coordinate, posting pictures so that people will think that VP Leni was so busy with her office.

JC Punongbayan is also one of the reasons why the Dilawans keeps on losing every elections, all they did was to allegedly deceived the general Filipino public.

Kasi the question of this hack Punongbayan is so idiotic, and he knows the truth naman that there is no actual work being done by the VP except to wait, or be designated by the admin to render government service.