Veteran actress and prominent celebrity Sharon Cuneta, one of the most vocal critic of Atty. Salvador Panelo reconciles with the former Presidential Legal Adviser, when they met during an event attended by Sharon Cuneta and Sen. Robin Padilla. 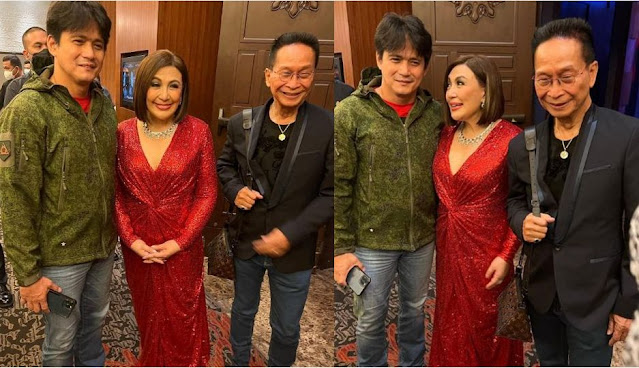 As far as we can remember, Atty. Sal Panelo and Sharon Cuneta were engaged in a verba confrontation after the Megastar called Atty. Panelo as “nakakahiya.”

In a viral photo posted on social media by Sen. Robin Padilla, Atty. Panelo and Sharon Cuneta were seen having a slight conversation as they visited the singer-actress in one of her concert. Atty. Panelo also claimed that he is indeed a “Sharonian,” or a true-bloodied supporter of Sharon Cuneta.

Sharon Cuneta and Regine Velasquez were having their “Iconic” concert. The two-night concert was held at the Marriot Grand Ballroom at Resorts World Manila.

In a separate interview with the mainstream media, Sharon Cuneta revealed that the two politicians watched the event.

Sharon Cuneta also shared snaps of their meeting on social media with the caption that she was surprised by her beloved friends, the number 1 senator who came with Sec. Panelo.

For incoming Senator Robin Padilla he claimed that he was so grateful with the meeting between Sharon and Atty. Sal. Sharon Cuneta and Atty. Panelo had some verbal confrontation during the election period wherein the lawyer used the song popularized by Cuneta without consent from the singer.