Retired Lt. General Antonio Parlade commended Pres. Bongbong Marcos (PBBM) for his decision to take on the Department of Agriculture portfolio which according to the veteran military man is indeed a master stroke. 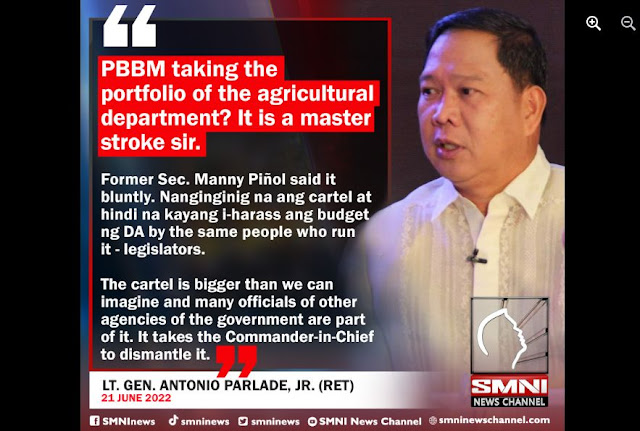 The decision of the President to handle the Department of Agriculture, albeit in a temporary capacity is brilliant. Gen. Parlade even agreed with former Agriculture Secretary Manny Piñol that the cartels are now shaking on their boots, figuratively speaking.

The Department of Agriculture’s budget will be harassment-free by the people who runs it-the lawmakers.

Gen. Parlade the head of the National Task Force to End Local Communist Armed Conflict (NTF-ELCAC) which is a tasked force formed during the Duterte administration, the main purpose is to respond and raise awareness to the ongoing communist rebellion in the Philippines.

The veteran military man wrote that an ordinary DA Secretary won’t be able to stop rice and meat smuggling, abolish the cartel and prevent hoarding.

The cartel in the country he revealed is bigger than we imagine and many officials of other government agencies are part of the said alleged cartel but Pres. BBM at the helm of the DA, dismantling the cartel is a certainty.

Gen. Parlade also likened the dismantling of the cartel to ending the country’s insurgency problem, because it requires the President to chair for it to be a working whole-of-government mechanism like the NTF-ELCAC to end the local insurgency.

The general revealed that one of the reaosns why the “players” don’t want a strong maritime defense because it will curbed smuggling, with smuggling contained, commerce is enhanced and more revenues generated.

PBBM taking the portfolio of the agricultural department? It is a master stroke sir.

This is something a typical DA secretary cannot do. Stop rice and meat smuggling, abolish the cartel, prevent hoarding. The cartel is bigger than we can imagine and many officials of other agencies of the government are part of it. It takes the Commander-in-Chief to dismantle it. This is like ending insurgency. It takes the President to chair the NTF-ELCAC for it to be a working whole-of-govt mechanism.

Back to the cartel, this is one reason the ‘players’ do not want a strong maritime defense. With strong border protection, smuggling is curbed. Commerce is enhanced. More revenues generated.

Your defense security translates to economic security and vice versa. They feed on each other. And then you feed can the people WELL.