Veteran blogger and prominent supporter of Pres. Rody Duterte on social media slammed a self-confessed Pinklawan supporter for her statement on social media criticizing the viral “Salamat PRRD” tarps on various roads in different parts of the country. 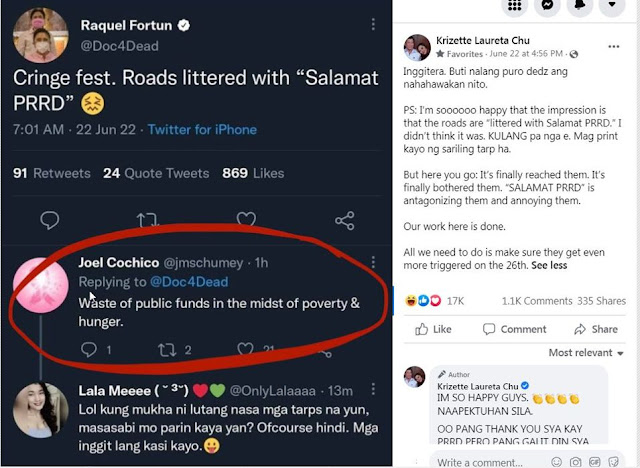 The Pinklawan or Dilawan supporter was identified as Dr. Raquel Fortun, the first Filipina forensic pathologist in the Philippines. She is a professor at the College of Medicine of the University of the Philippines-Manila.

Dr. Fortun made some headlines on social media particularly on Twitter after her controversial statement regarding the viral “Salamat PRRD” tarpaulins that littered along major roads in Metro Manila.

A fellow Dilawan supporter then added a statement involving public funds as he noted “Waste of public funds in the midst of poverty & hunger.”

Due to the statement made by Dr. Fortun on Twitter, a well-known DDS blogger and supporter of Pres. Duterte and Bongbong Marcos, Krizette Laureta Chu responded as she called Raquel Fortun as “Inggitera.”

PS: I’m soooooo happy that the impression is that the roads are “littered with Salamat PRRD.” I didn’t think it was. KULANG pa nga e. Mag print kayo ng sariling tarp ha.

But here you go: It’s finally reached them. It’s finally bothered them. “SALAMAT PRRD” is antagonizing them and annoying them.

Our work here is done.

All we need to do is make sure they get even more triggered on the 26th.

Netizens also joined the conversations as they shared their experience with the show of support and gratitude towards the outgoing President which only happened during the time of Duterte.

Here’s Some of the Comments from Netizens:

Iris Urmataam: It was full of Salamat PRRD along MOA! I was telling my kids na 1st time may pa tarpaulin (ng pasasalamat) sa outgoing president.

Ma. Victoria Ramirez: Yesss.. Hitting two birds in one stone yeaaah.. Thanking PRRD for the 6 years of service and most of all triggering the enemy at the same time..

Ma. Kathryn Costes: Waste of public funds? The people donated it for the purpose…