Veteran US-based vlogger and accountant Edwin Jamora gives credit to the outgoing Duterte administration that resulted to the offers made by the Russian government to help the country’s energy needs under the new administration headed by Pres. Bongbong Marcos. 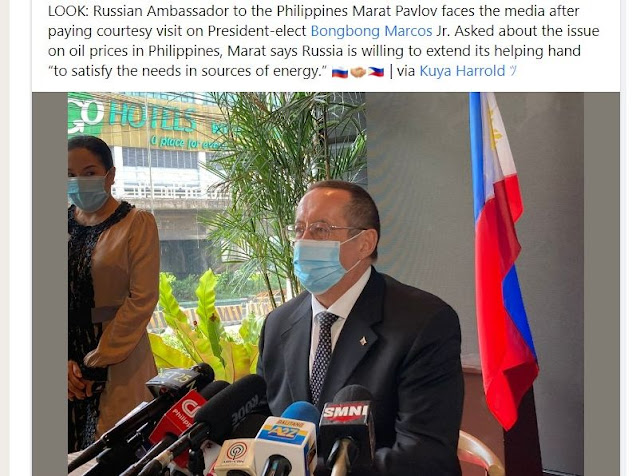 According to the Bicolano blogger, Pres. Rody Duterte’s brilliant foreign policy is the reason why Russia has offered to help the country satisfy its energy needs amid the skyrocketing prices of oil worldwide.

The US-based vlogger said that he is happy with incoming President’s decision to adopt the same foreign policy and even more happy that Prof. Clarita Carlos is on his side, to lend her technocratic expertise.

Jamora also described the Russian Ambassador’s message very reassuring especially when it comes to Russia’s commitment to helping our country’s energy needs which is now being used as issues by the Dilawans.

This is good news, mga friend!

This is the fruit of the Duterte Gambit (friend to all, enemy to none) foreign policy which became the international relations formula on how a small nation can balance its relationships among superpowers without compromising their national interests by adopting the self-serving policy of foreign powers.

I am happy that BBM is adopting the same policy and that he is now being more enabled with Clarita Carlos lending her technocratic expertise.

The message of the Russia ambassador is very reassuring when it comes to Russia’s commitment to helping our country’s energy requirement.

And, as a way of rewarding our independent foreign policy, Russia would surely sell oil to us at a friendlier rate.

Let us continuously to be thankful kay Lord for He now has blessed us with two consecutive competent presidents.