Netizens took to social media as they reacted on the latest pronouncements made by VP Leni Robredo about the meaning of NGO. According to Thinking Pinoy with just a few days left of being a Vice President “humabol pa si Madam.” 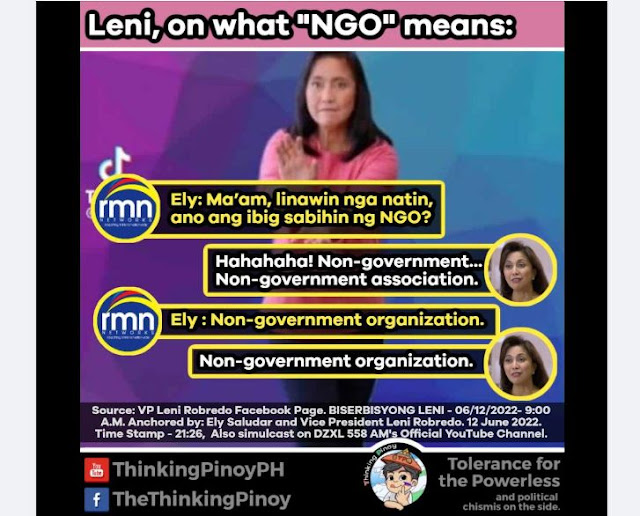 During the regular radio program of VP Leni and veteran journalist, Ely Saludar. VP Leni was asked by his partner and co-host about the meaning of an NGO.

According to VP Leni Robredo the meaning of NGO is NOn-Government Association which is way different from the Non-Government Organization meaning.

Luckily his partner and co-host immediately corrected the Vice President and told her about the real meaning of an NGO.

The latest gaffee of VP Leni Robredo which was seen live on social media like wildfire and generated mixed reactions from netizens most of them were against the Vice President.

The incident happened during Independence Day on the official Facebook Page of VP Leni Robredo and was simulcast live on DZXL 558 AM’s Official YouTube Channel.

Netizens also reacted on the latest controversy regarding the outgoing Vice President and poster girl of the opposition who failed with her bid to win the presidency.

Watch the Video of VP Leni:

Melody Manzano: NGA- non goverment association… well what do we expect from her nga-nga