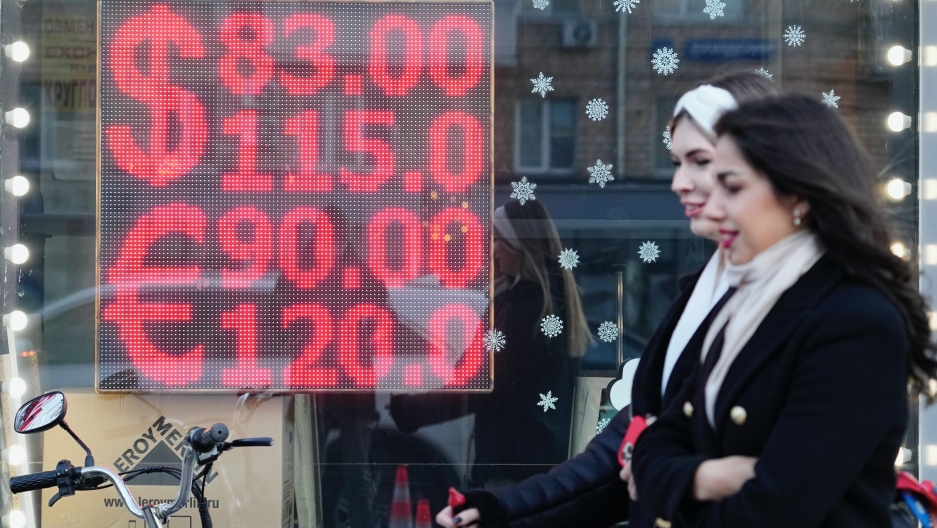 Stanislav owns a successful marketing business in St. Petersburg, Russia and has spent the past five months trying to make ends meet in a world where sanctions against Russia have all but unplugged the economy.

“I have some clients from the Netherlands and from Israel, and they cannot pay for my services right now because my bank is blocked by sanctions. … I’m trying to find a solution,” said Stanislav, who asked to be identified by only his first name so that he can speak more freely.

His solution is a rather newfangled one: cryptocurrency — or crypto for short.

While Visa and Mastercard have stopped processing transactions from Russia because of the sanctions, crypto exchanges continue to do business there. Crypto executives say they have stayed on so that everyday Russians can keep paying their bills.

But it is only a temporary fix. Stanislav said that crypto isn’t really designed to pay monthly bills: commissions and transaction fees make it prohibitively expensive in normal times — the times before the sanctions.

For Russian professionals who can afford to leave the country, converting ruble savings into a digital currency and then reconverting it into the local currency wherever they end up can be a lifeline, which has brought another unexpected change to Stanislav’s life: He’s become a kind of crypto consultant, teaching friends and family how to use digital currencies.

His sister left Russia to join their mother in Egypt shortly after the war began and Stanislav taught her how to set up digital wallets and foreign debit cards as well as how to withdraw bitcoin and turn it into cash.

“You take some rubles here, you buy some USDT on Binance. Then, you convert it on the other side.”

“You take some rubles here, you buy some USDT on Binance,” he explained. USDT is a cryptocurrency that is pegged to the US dollar, and Binance is an online cryptocurrency exchange. “Then, you convert it on the other side.”

“Even you can go to the café and just sit with him by the table,” he said. “You will send them the transaction, and they will change it into cash so you can use it.”

It’s working for his sister in Egypt, but Stanislav said that he can’t really go invoice-to-invoice and paycheck-to-paycheck only using crypto.

While all this is unsettling for Stanislav, what he finds most worrisome is the way that vestiges of a nationalist past are beginning to reappear all around him.

The Z symbol is everywhere in Russia to promote its military operations in Ukraine.

Related: ‘No Z allowed’: Some European countries move to ban the symbol used to promote Russia’s war in Ukraine

“I’m with you,” it is meant to say, “and you and I are supporting the fight against the Ukrainian government.”

But for Stanislav — who is half Russian, half Ukrainian — the Z symbol has taken on more sinister overtones.

“It means you are working for the war, you’re supporting it,” he said. “But it is the same as the German swastika for me and for people who understand what is happening now. It scares me.”

There are other worrisome signs.

The St. Petersburg skyline is awash in Russian state flags — “On every building, on the school, and the libraries, this is what I can see,” he said, adding,  “Before, we had no flags, but now they are everywhere.”

Stanislav’s kids are in private school, but in the government schools, he said, kids are already being subjected to a kind of patriotic education that puts the war in Ukraine in the best possible light.

“They are talking about how this is not a war, but it is a special operation to free Ukraine,” he said.

Back in March, Russia seemed to embrace cryptocurrencies as a monetary alternative when it announced that it might be willing to accept Bitcoin from friendly countries as payment for its oil and gas exports.

The Ministry of Finance put the kibosh on such talk last week. It said that crypto could be used for the sorts of things small business people like Stanislaw need, but not as a legal tender.

Stanislav, for his part, remains realistic about the challenges that lie ahead. He knows he will probably have to leave with his family, and start somewhere else.

He’s considering a move to Turkey.

“But for now,” he said, shaking his head, “No happy news. No optimism.”

An earlier version of this story originally appeared in The Record.Media. It was written by Dina Temple-Raston, with additional reporting by Sean Powers and Will Jarvis.