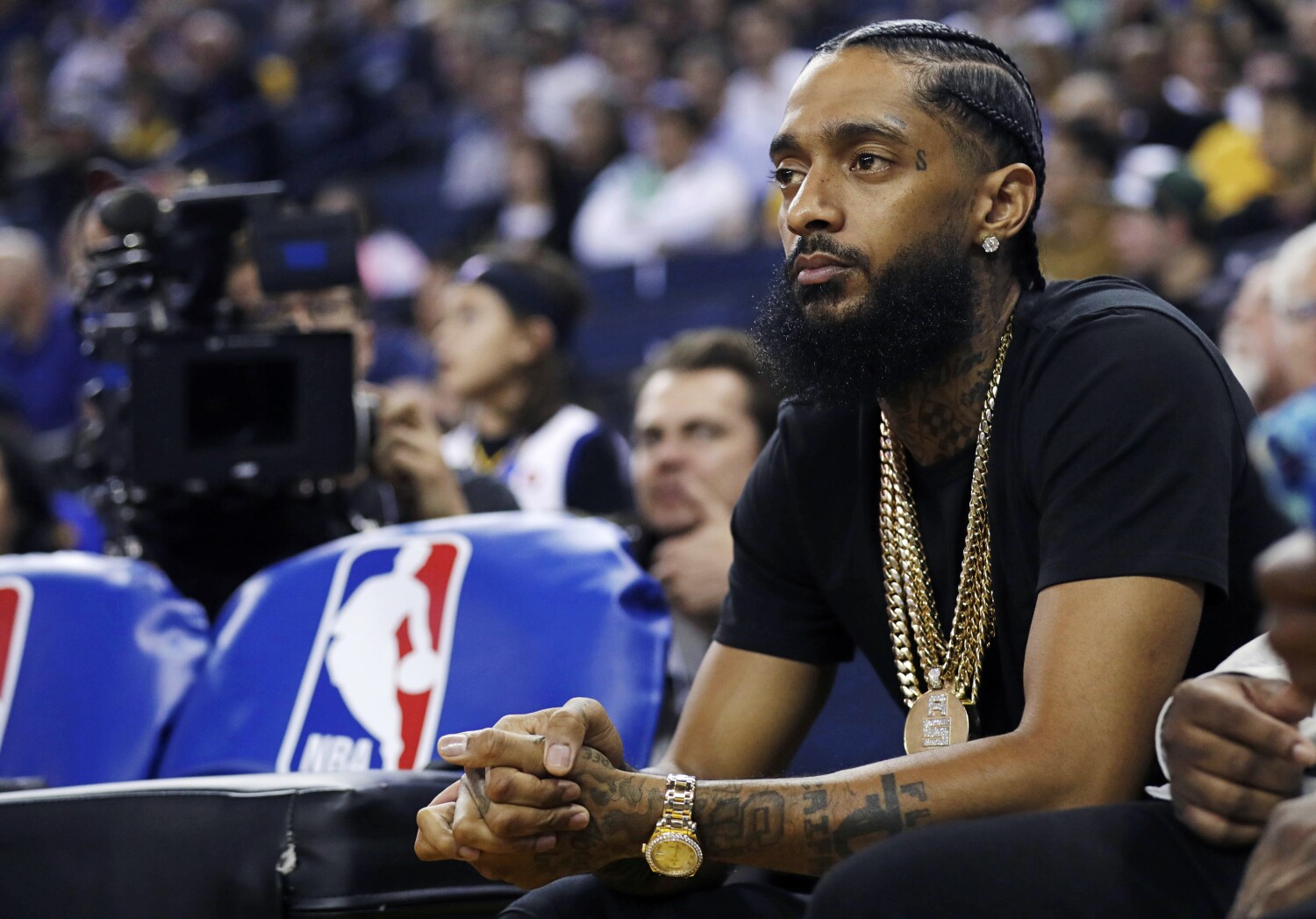 Videos of the shooting captured Eric Holder Jr. gunning down the beloved L.A. rapper outside his clothing store in Crenshaw in March 2019. And at the start of Holder’s trial earlier this month, his attorney affirmed for jurors the 33-year-old gang member had killed Hussle and injured two other men.

Instead of Holder’s guilt or innocence, when jurors begin deliberations Friday they will decide something far less concrete: Whether Holder should be shown some leniency because a conversation he had with Hussle shortly before the shooting left him unable to control his emotions.

In his opening statement at the start of the two-week trial, Holder’s attorney, Aaron Jansen, said his client had been sent into a mindless rage after Hussle brought up a rumor that there was “paperwork” on Holder — a term used to suggest someone is a police informant. Because the killing was not done with premeditated intent but while Holder was overcome with anger and fear brought on by the snitching accusation, Jansen argued that Holder should be found guilty of manslaughter, not murder.

While some witnesses testified that they believe Hussle was trying simply to warn Holder of a potential problem, Jansen said the two men were members of the Rollin 60s street gang and Holder believed the suggestion that he snitched could put his life at risk.

Holder left the store parking lot and returned nine minutes later with a semiautomatic handgun and a revolver. He shot Hussle 11 times, striking the two other men as well.

Holder was charged with murder and attempted murder. If convicted of those crimes, he will face life in prison. If the jury accepts Jansen’s argument and finds Holder guilty of less serious manslaughter and assault charges, his time behind bars will be far less.

In the years leading up to his death, Hussle was ascending both as a rapper and community figure. He’d opened the Marathon Clothing store in 2017 and helped found a co-working space called Vector 90 one year later. After years spent passing his own music CDs out on the street and selling clothing, he’d broken through as a rapper with his 2013 mixtape “Crenshaw.”

His lone full-fledged album, “Victory Lap,” was nominated for a Grammy in the best rap album category in 2018, and he bought the lot where the Marathon Clothing operated a year after that.

Often praised for reinvesting in the neighborhood that inspired his music, Hussle’s death was met with widespread sadness and anger. Marches denouncing gang violence were held, and his funeral took place inside the then-Staples Center, home of the rapper’s beloved Lakers. At the site of his death, Hussle’s image is memorialized in framed paintings in nearby businesses and street murals.

During the trial, prosecutors repeatedly showed photos of a memorial to Hussle that featured both colors associated with Hussle’s gang and those of an opposing one to impress upon jurors how widely Hussle was adored.

“These bullets traumatized a whole community. Crimes like this, the enormity of these crimes, is that they can’t be contained … there are a lot of unnamed victims in this,” L.A. County Deputy Dist. Atty. John McKinney said in his closing arguments Thursday. “The bullets land either in a person or they hit a wall. They stop. But in a figurative sense these bullets are still traveling. This neighborhood has not forgotten.”

McKinney said Holder likely harbored jealousy toward Hussle when he showed up at the store on a Sunday after word spread among fans on social media that Hussle would be there. Holder was a failed rapper, who had tried to perform under the moniker “Fly Mac.”

Holder also appeared to be broke, borrowing money to buy some French fries minutes before he killed Hussle, witnesses have said.

And McKinney sought to downplay the idea that Holder had acted while panicking and was helplessly caught up in his emotions. Bryannita Nicholson, who had been casually dating Holder and unwittingly served as his getaway driver, testified last week that Holder started loading his gun in her car as she drove him back to the store. He then directed her to park around the corner from the lot and wait there for him to come back, she said.

“[Premeditation] doesn’t mean that you plan something for weeks. It means you think about it, and you do it. We all engage in premeditated and deliberate acts every day,” McKinney said. “He started thinking about this well ahead of actually pulling the trigger. He could have stopped at any time.”

Other witnesses also undercut the idea that Hussle’s comments were reason for Holder to fear for his life. Herman Douglas, a longtime friend of Hussle and a Rollin 60s member who goes by the street name “Cowboy,” said the rapper was calm when he spoke to Holder and was letting him know there was a rumor about him that he should quash.

Douglas, who has been in court nearly every day of the trial wearing shirts emblazoned by Hussle’s face and a black cowboy hat, downplayed the idea that a gang member found to be cooperating with police needed to fear for one’s life.

“Nowadays there’s so many snitches walking around … that’s a myth. You could walk out a gang right now. We don’t care if you walk out of the Rollin 60s, we ain’t gonna do nothing to you,” he said. “Me getting on the stand right now would be considered snitching. … I ain’t worried. Maybe in the ‘80s, yeah. But this is 2022. It’s time for change.”

Regardless, Jansen continued to emphasize the risk to someone accused of “snitching” during his closing arguments Thursday. He noted that several witnesses had refused to testify in the case or been uncooperative on the stand.

One of the two men injured in the shooting, Kerry Lathan, gave vague and evasive answers during testimony and tried to avoid identifying Holder as the gunman. Nicholson had been threatened on social media, Jansen said, while the prosecution had to seek a bench warrant when another Rollin 60s member who was at the scene of the shooting did not appear to testify.

Douglas himself, Jansen pointed out, streamed a video to his Instagram outside the courthouse weeks ago pushing back on the notion that his own testimony was “snitching.”

Holder did not take the stand during the trial. Jansen called only two witnesses in his client’s defense, one of whom was Douglas. On Thursday afternoon, as the court emptied out for lunch, Douglas stood up and jeered Holder, telling him to put a cold steak on his eye to reduce the swelling from a jailhouse beating the defendant suffered Tuesday.

Jansen told reporters this week that his client was punched from behind and cut with a razor by two other inmates while waiting to come to court Tuesday. Holder briefly lost consciousness and needed three staples in his head to close the wound, Jansen said.

A motive in the attack remains unclear and the Los Angeles County Sheriff’s Department, which runs the jails, has refused to provide information about the assault. McKinney declined to comment on the attack as well, and the jury has not been provided with information about Holder’s injuries.