Veteran TV Host and political analyst Jay Sonza slams the mainstream media for sensationalizing and focusing on Pres. Bongbong Marcos wristwatch rather than the inauguration during one of the country’s most important day to remember. 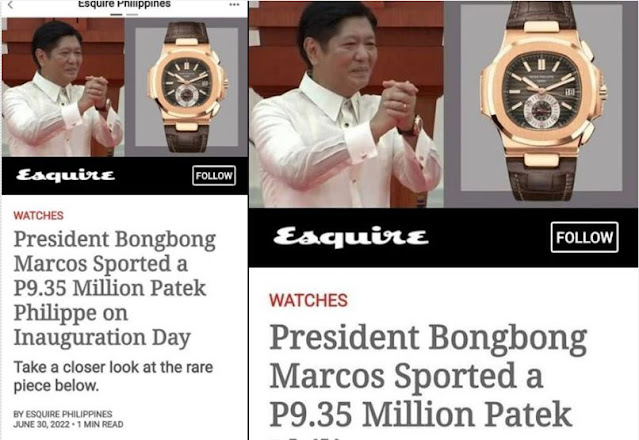 According to retired broadcaster the mainstream media were acting like neighborhood Marites rather than the watchdog of Philippine democracy by dedicating a contemptuous news article on PBBM’s expensive wristwatch instead of writing about the observance of protocols and traditions of a presidential inauguration.

This is aside from the fact that the Marcos family and his wife’s family already belong to the alta sociedad so owning one expensive wristwatch is no longer a big deal to them.

Jay Sonza stated that the rich and successful people, wearing expensive watches like Patek in important occassion is a standard part of men’s wardrobe.

The veteran journalist even added that who’s who in the Philippines who attended the June 30 inauguration of Pres. Bongbong Marcos wore luxury wrist like the one worn by PBBM.

Jay Sonza ended his post claiming that he know a farmer who wears a Patek wristwatch when attends Sunday mass.

Here’s a typical reaction of the “wokes” of Imperial Manila.

Instead of writing about the observance of protocols and traditions of a presidential inauguration; the valedictory address of the incoming president; and the directions spelled in the first nationwide address, this “mainstream media” chose to write with contempt, the wrist watch of the duly elected chief executive of the nation.