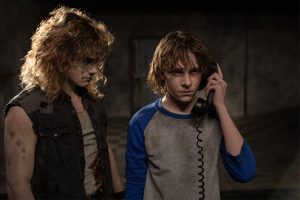 Are you brave enough to answer the call of this late 70s coming-of-age movie?

An ingenious mix of suspense, horror, and coming-of-age drama, “The Black Phone,” starring Ethan Hawke, Mason Thames and Madeleine McGraw, is another brutal and riveting tale that features a terrifying phone call.

Based on the award-winning short story of an acclaimed writer and the son of the legendary horror author Stephen King, Joe Hill’s “The Black Phone” follows 13-year-old boy Finney (Mason Thames) who is kidnapped by an infamous child abductor and serial killer known as The Grabber (Ethan Hawke). While trapped inside his abductor’s basement, Finney uncovers a detached black rotary phone that connects him to the killer’s former victims.

Scott Derrickson, the film’s director, reminisced how he discovered “The Black Phone:” he randomly stumbled upon Joe Hill’s short story in a bookstore. “At the time, I didn’t know who Joe was, let alone that he was Stephen King’s son […] I thought the concept was fantastic and such a good idea for a movie. I never forgot about it.”

During his early years as a writer, “The Black Phone” author Joseph Hillstrong King knew that publishers would come running to print his works if they knew he was the son of one of the most well-acclaimed horror authors of all time. So to stay behind his father’s limelight, he decided to write under the pseudonym Joe Hill for over a decade.

After a series of rejections, his works eventually got discovered. Hill’s short story, the 20th Century Ghosts (where the Black Phone came from) became a huge hit after it came out in 2005. This has brought Hill to stardom, but as an author in his own right.

But this isn’t the only thing fascinating about Hill’s past. The story behind “The Black Phone” was inspired by his childhood as well, as a kid who grew up in an old house in Maine.

“There was a phone in the basement that wasn’t connected to anything, and I found that phone creepy and unsettling. It didn’t make sense for a phone to be in a basement with a dirt floor and crumbling concrete walls. As a kid, the worst thing I could imagine was that phone ringing,” said Hill.

The film also features a glimpse of what it’s like to be a kid in the ‘70s and ‘80s when playtime meant going outside and meeting new friends. But this had also made them more susceptible to the dangers of the outside world — which is not only limited to kidnapping, as the perils of getting bullied threatened the kids’ safety, too.

For Hill, unlike today, bullying was so normalized back then. “My earliest memory up until high school was the violence of the neighborhood that I lived in,” Derrickson said.

“The primary feeling that I remember having as a child was fear. I was the youngest kid on the street full of bullies,” he added.

“The Black Phone” is rated R13 by the MTRCB (only 13 years old above can watch in cinemas).

Advance screening is also available as early as July 11 and 12 in select cinemas nationwide.