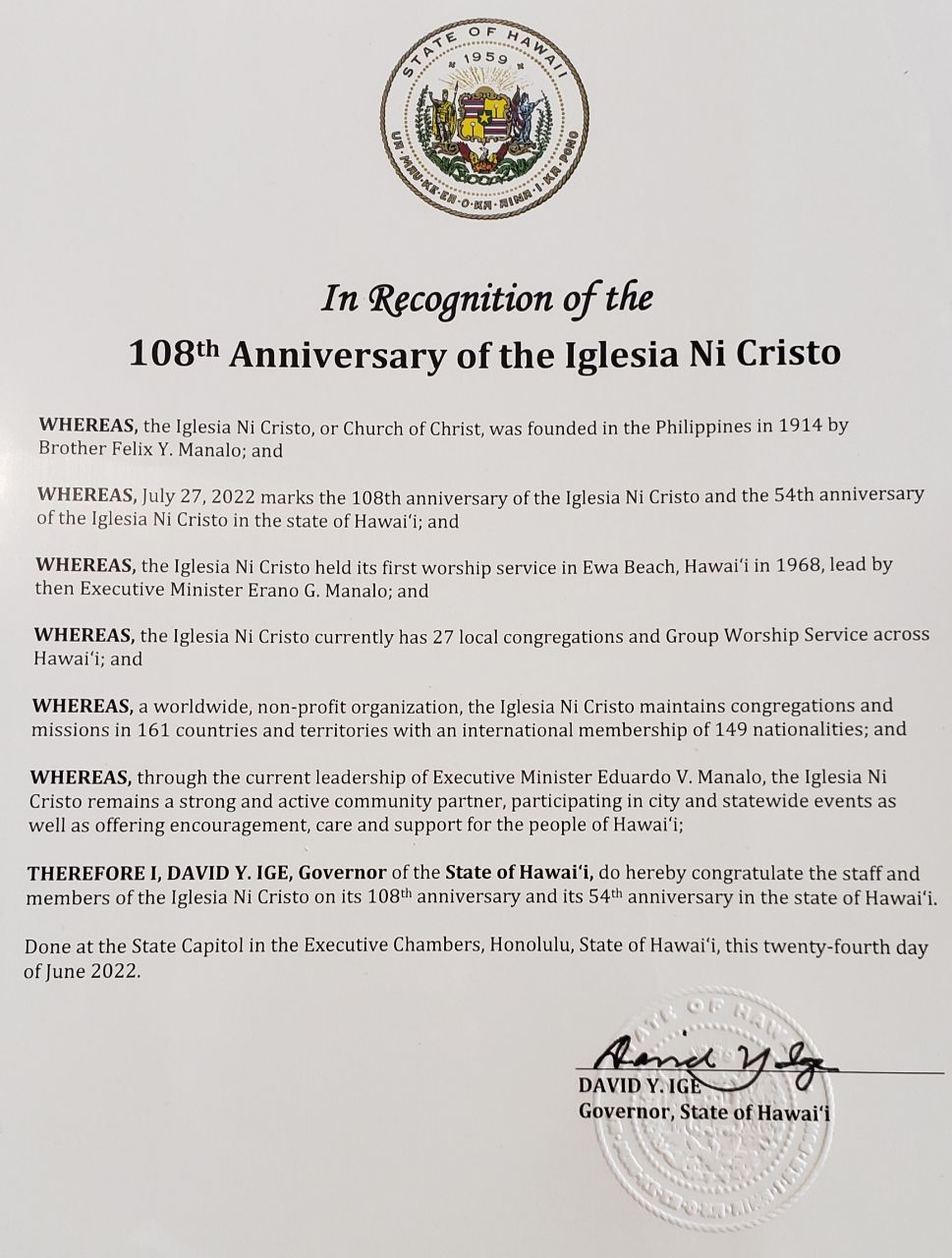 (Eagle News) — The Iglesia Ni Cristo was honored and recognized by the government of Hawaii as the Church reached its 108th anniversary.

The honorary certificate said that “through the current leadership of Executive Minister Eduardo V. Manalo, the Iglesia Ni Cristo remains a strong and active community partner, participating in city and statewide events as well as offering encouragement, care, and support for the people of Hawaii.”

The certificate noted how the first INC worship service was held at Ewa Beach in Hawaii 54 years ago, on July 27, 1968.

It also noted the INC’s growth since its inception in Hawaii. The Church Of Christ now has 27 local congregations across this US State.

Aside from the Hawaii governor, Hawaii Senator Bennette Misalucha also commended the Church for its various efforts to help the people.

She noted that through the INC’s dedication in helping communities with their various needs, it has become “very integral to the growth of the community.”

“It reflects on the leadership [of the Church],” Senator Misalucha said.

“I also want to give my special aloha to Brother Manalo for all his love and support of the people of Hawaii,” she said, greeting the INC Executive Minister.

INC members expressed their appreciation for the honorary certificate that the Church received from the Governor of Hawaii.

INC Ministers of the Gospel, Brothers Eduardo Javier and Voltaire Tamisin, received the honorary certificate on behalf of the Church and the Church Administration on July 8, 2022.

“This day is important to us, memorable to each one of us because the people here, especially the people of the government, recognize the importance and the impact of the Iglesia Ni Cristo in Hawaii, particularly here in Honolulu,” said Brother Javier who was one of the two ministers who received the honorary certificate on behalf of the INC.

Following this occasion, the INC members in Oahu conducted a beach cleanup at White Plains Beach on July 9. The activity was also in line with the Church’s efforts to continue conducting activities that would help local communities.

The Iglesia Ni Cristo (Church Of Christ) celebrates its 108th anniversary on July 27, 2022. It was first registered in the Philippines on July 27, 1914 by its first Executive Minister Brother Felix Y. Manalo.

Through the years, the INC has conducted various humanitarian efforts and evangelical missions, as well as extended acts of kindness that have helped local communities.

The INC continues to grow worldwide and has reached 161 countries and territories, with its members coming from 149 races and nationalities.

(Eagle News Service with a release from INCPIO)