Controversial director Darryl Yap made some headlines anew on social media after he was accused by some critics that he was allegedly giving away money to entice moviegoers to watch his highly anticipated movie titled “Maid in Malacañang.” 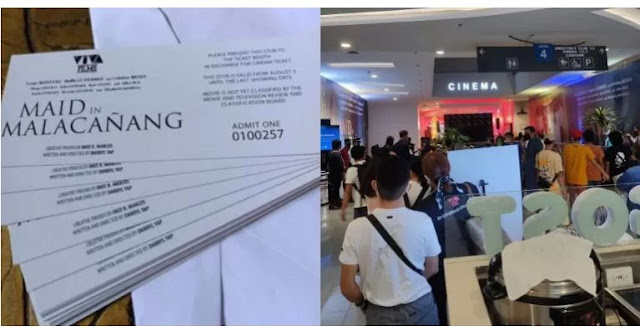 According to Darryl Yap there is no truth with the fake news circulating on Twitter and on various social media sites accusing him of bribing moviegoers to watch his movie.

The movie titled “Maid in Malacañang tells about the story of the Marcos Family before they were dispatched from the Palace at the height of the 1986 EDSA Revolution.

Darryl Yap denied all the allegations that he was bribing moviegoers just to watch the movie, after some news spreads like wildfire on social media accusing him of bribery.

Some netizens on social media allegedly critics of Darryl Yap accused the director of giving away tickets and at least P3,000 worth of pocket money just to watch the movie.

According to the camp of movie director Darryl Yap the said photo of a movie ticket posted by some critics is not really a cinema ticket but it is intended for the block screening ticket.

Netizens and supporters of “Maid in Malacañang” and Darryl Yap claimed that hundreds of moviegoers are now lining up to watch the highly anticipated movie to hear the other side of the story regarding what really happened during the remaining days of the Martial Law in the Philippines, at the perspectives of the Marcos family.

The movie Maid in Malacañang tells the story of the 72 hours happening before the Marcos family was expelled from the Palace due to popular uprising.

Sen. Imee Marcos, one of the producer of the movie also clarified that they will not try to change the history of the Philippines, all they want is to let the people know their side of the story, not just the story of the victors who wrote it in our history books.