A veteran Manila Bulletin writer exposes how ignorant the critics of Vice President Sara Duterte regarding the controversial school uniform pronouncement by the VP as she stated that uniforms are not mandatory in public schools. 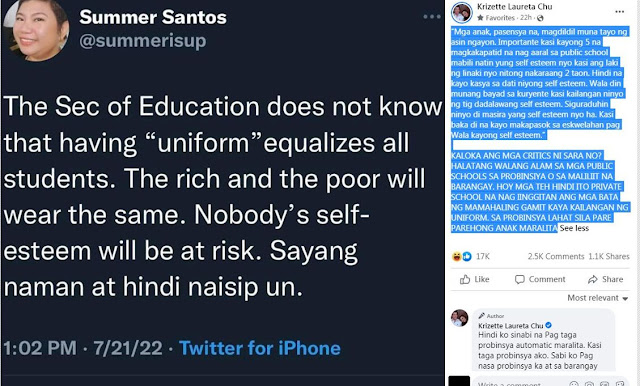 VP Sara Duterte in an official statement released to the media said that “Even before the pandemic, it is not a strict requirement for public school to wear uniforms (DepEd Order No. 065, s. 2010) to avoid incurring additional costs to the families of our learners.”

VP Sara added further that “All the more that it will not be required this School Year given the increasing prices and economic losses due to the pandemic.” VP Sara stated.

The statement of VP Inday Sara Duterte regarding the non-mandatory wearing of school uniforms as critics of the Duterte family and the Marcos administration lined up to criticize the statement of the DepEd Secretary.

On Twitter, a Dilawan supporter identified as Summer Santos criticized VP Sara because according to her, VP Sara does not know that wearing school uniforms equalizes all students.

Santos noted that nobody’s sel-esteem will be at risk if all public school students are in school uniforms. The critic also lamented the wasted opportunity of making public school uniforms mandatory and said VP Sara did not think about this very thoroughly when making decisions.

The statement of Summer Santos on Twitter caught the attentions of Manila Bulletin writer and veteran blogger Krizette Laureta Chu who responded to the tweets presented by Santos.

According to Krizette Chu, who claimed to be speaking from the perspective of a mother telling her 5 children to make do with “asin” or salt to go with cooked rice because what matters most is they can buy self-esteem (school uniforms) especially how they have outgrown their school uniforms in the last 2 years.

The uniforms according to Chu could no longer fit to their self-esteem este school uniforms. In addition, the family will skip paying the electricity bill becuase they need to buy 2 pairs of self-esteem. This is to make sure that their self-esteem will not be destroyed.

Krizette Chu then turned serious and slammed the critics of VP Sara Duterte, who also served as DepEd Secretary. She said Santos’ argument just goes to show that Sara’s critics are clueless of the reality in public schools in the provinces or in small brangays.