Motorist Went Viral for Standing His Ground Against VIP Motorcade

Motorist Went Viral for Standing His Ground Against VIP Motorcade


A motorist went viral on social media after he made a brave moves standing his ground against a VIP motorcade counter flowing in a busy route. The video of the motorist that went viral was first posted on Reddit and it was then re-posted to various social media platforms such as Facebook and YouTube. 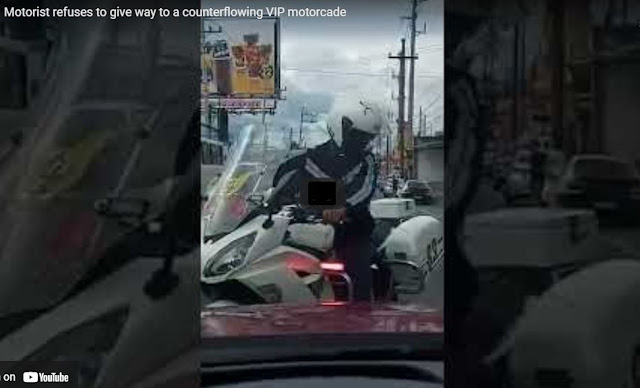 Netizens showered praises to the motorist who bravely stand his ground against abusive VIP motorcade at the busy road along Barangay Buho, Silang, Cavite.

In a video originally posted by u/Far-Masterpiece-6965 Reddit user, the said motorist did not allow a motorcade to counterflow and even warned the escort of the VIP vehicle.

As seen on the video the motorcade did not pushed through with their counterflowing plans as they moved backward and follow the correct way.

In the story revealed on Reddit by the viral motorist he revealed that the owner of the said VIP vehicle went to his house and asked him to delete the viral video but the uploader refused.

Meanwhile, based on initial investigation by the Philippine National Police (PNP) Highway Patrol Group (HPG) as they noted that used of blinkers and “wang-wang” by unauthorized vehicles are strictly prohibited.

PNP-HPG Service Legal Officer PCpt. Bingsky Foncardas was quoted as saying “For authorized use of wang-wang and blinkers, the vehicle must be a marked government property which is used only during official functions or performance of duties such as emergency response and law enforcement,” he stated.

As of posting time it is still under investigation on who really is the owner of the said VIP vehicle being escorted by alleged PNP-HPG officer.

As far as we can remember, Senator JV Ejercito urged the Marcos administration to be strict in the implementation of anti-wangwang due to the rampant use and arising number of complaints against those VIP vehicles.

Watch How the Motorist Went Viral: