Former Army Scout Ranger and veteran blogger Abe Purugganan doubts Loren Legarda’s sincerity on issuing a statement condemning the violence and all forms of terrorism and calling for the end of all armed conflict. 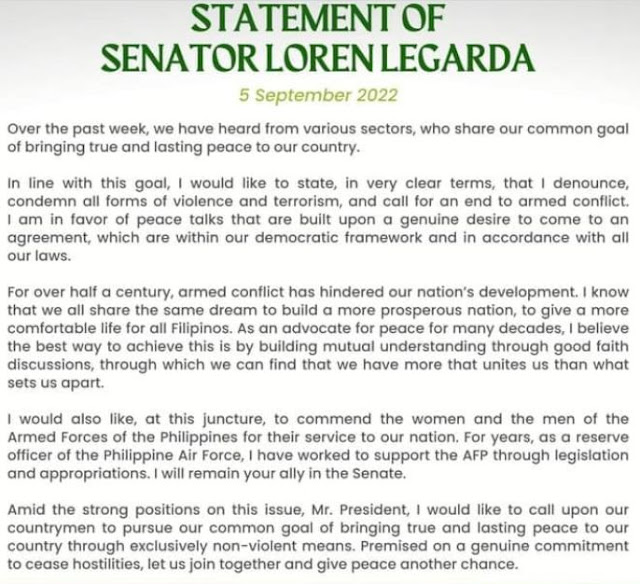 According to the veteran Scout Ranger who is best known as the co-founder of the Young Officers Union, a group of rebel military officers in the late 80’s, the senator should denounce the CPP-NPA-NDF face to face and perhaps he will believe the lawmaker’s statement.

In the viral post made by Purugganan, he demanded Sen. Loren Legarda to denounce the Communist Party in public who are doing alleged terrorism and violent acts and perhaps he and fellow doubters will believe her.

The veteran Army officer and Scout Ranger, Major Abe Purugganan made it clear to the senator that there are no other sectors except the terrorist organizations who rallied around her call for peace talks. In other words, all sectors are angry at Sen. Legarda for allegedly supporting the Communist Party of the Philippines.

Sir Abe Purugganan remarked that as a lawmaker and Senator of the Republic, she should know better that peace talks with the terrorists is just deception in aid of their terroristic agenda.

Unless of course Sen. Legarda refuses to understand for the Filipinos’ sake because she is complicit of this deception of the CPP-NPA-NDF.

Just to be clear, there were no other sectors except the terrorist organizations who supported your call for peace talks. In fact, all sectors condemned you for supporting terrorists.

As a senator, you should know by now that that the peace talks with these terrorists is just a deception in furtherance of their terroristic agenda. Unless of course you refuse to understand for our people’s sake because you are a part of this deception.

Netizens agreed with the statement of Sir Abe Purugganan as one of them commented that deception is taught at the Master in National Security Administration Program where Legarda graduated so he won’t accept if she claimed she is not aware of the NPA’s tactic of deception.

Another netizen shared his thoughts, former Chief of Staff and AFP Retired General Alexander Yano commented and shared what he thinks of Sen. Legarda’s statement denouncing terrorism and violence.

“Prepared script versus Spontaneous statement. I tend to believe the latter.”

Sir Abe Purugganan then replied to the comment of the retired general as he was quoted as saying “Damage control, sir. I heard she has been scouting for PR people to help her averse the affects of her previous pro-terrorist’s statements.