Journalist Savage Takedown of Leni Robredo After Remarks Against Trolls

Journalist Savage Takedown of Leni Robredo After Remarks Against Trolls


Veteran journalist Ira Panganiban made some headlines on social media after his savage takedown of former Vice President Leni Robredo after her controversial remarks against critics and alleged bashers. 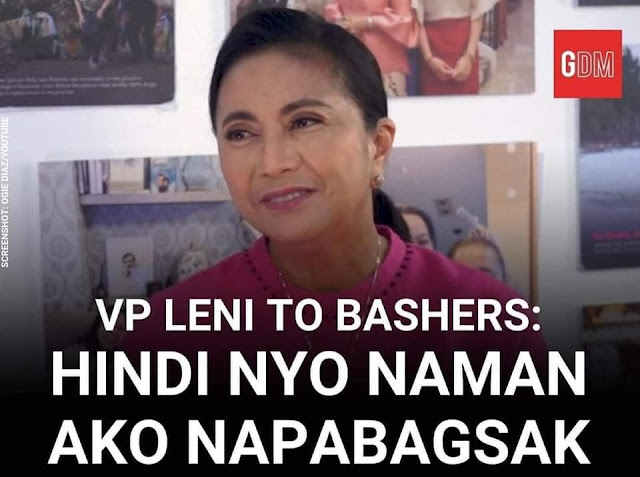 Leni Robredo once said that her trolls and bashers are the ones who are at a disadvantage because they need to lie in an attempt to destroy her.

Perhaps, there are a few who believe their lies but whose the loser, definitely not Leni because it never diminish her as Leni Robredo stated that “You are the ones who are getting diminished. Because you need to do evil in your attempt to destroy me. But you failed to destroy or knock me down.” Leni Robredo stated.

This statement of VP Leni Robredo first appeared in the vlog of showbiz reporter and Pinklawan supporter Ogie Diaz before the May 2022 national and local election.

The statement of VP Leni during the 2022 election resurfaced anew as she refused to go away from the limelight by continuing to engage her critics, like the previous event in Pampanga saying that the Ateneo honorary degree and the Harvard speakership stint are perhaps God’s way to tell critics that the various names attributed to her are false.

Due to the popularity of VP Leni’s latest statement against her critics, netizens reposted the old meme from FB Page Global Daily Mirror featuring Leni Robredo telling bashers that no matter how hard they try to destroy her, she remain standing and unaffected.

The controversial meme that went viral just recently caught the attention of former ABS-CBN journalist and current editor of Autocar Philippines and one of the admin of the popular FB Page Luminous made an ego-deplating message to Leni Robredo’s statement that her bashers has failed to knock her down.

The statement of Ira Panganiban and his remarks against Leni Robredo became a huge hit among the followers of Luminous, generating 10 reactions, 2.7 comments and 200 shares.

Netizens joined the conversations as they reacted on the statement released by Panganiban against Leni Robredo.

Here’s Some of the Comments Posted Online:

Josemaria Cruz: Seriously, nakakaawa cya. She maybe highly communicable and potently a mental instability driver. She drives readers crazy and desperate towards suicide for having heard her. She is poiXon. Obviously, war between good and evil is on display. See, the ways of the devil before you. Whom the gods want to destroy, they make fools first.