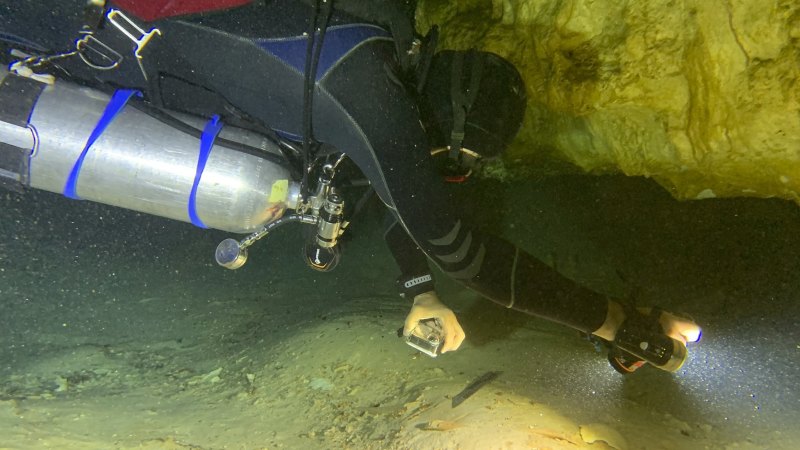 “There is a lot more study that has to be done in order to correctly interpret” the find, Del Rio said, noting that “dating, some kind of photographic studies and some collection” would be needed to determine exactly how old the skeleton is.

Del Rio has been exploring the region for three decades, and in 2002, he participated in the discovery and cataloguing of remains known as The Woman of Naharon, who died around the same time, or perhaps earlier, than Naia – the nearly complete skeleton of a young woman who died around 13,000 years ago. It was discovered in a nearby cave system in 2007.

President Andres Manuel Lopez Obrador is racing to finish his Maya Train project in the remaining two years of his term over the objections of environmentalists, cave divers and archaeologists. They say his haste will allow little time to study the ancient remains.

Activists say the heavy, high-speed rail project will fragment the coastal jungle and will run above the fragile limestone caves, which – because they’re flooded, twisty and often incredibly narrow – can take decades to explore.

Caves along part of the coast already have been damaged by construction above them, with cement pilings used to support the weight above.

The 1500-kilometre Maya Train line is meant to run in a rough loop around the Yucatan Peninsula, connecting beach resorts and archaeological sites.

The most controversial stretch cuts a more than 110-kilometre swath through the jungle between the resorts of Cancun and Tulum.

Del Rio said the route through the jungle should be abandoned and the train should be built over the already-impacted coastal highway between Cancun and Tulum, as was originally planned.

“What we want is for them to change to route at this spot, because of the archaeological finds that have been made there, and their importance,” said Del Rio.

“They should take the train away from there and put it where they said they were going to build before, on the highway … an area that has already been affected, devastated.”