Veteran broadcast journalist and prominent radio personality, Jay Sonza revealed on his latest social media post that fellow journalist turned lawmaker, Senator Raffy Tulfo was allegedly nurtured by the opposition to let him run for President in the upcoming 2028 elections. 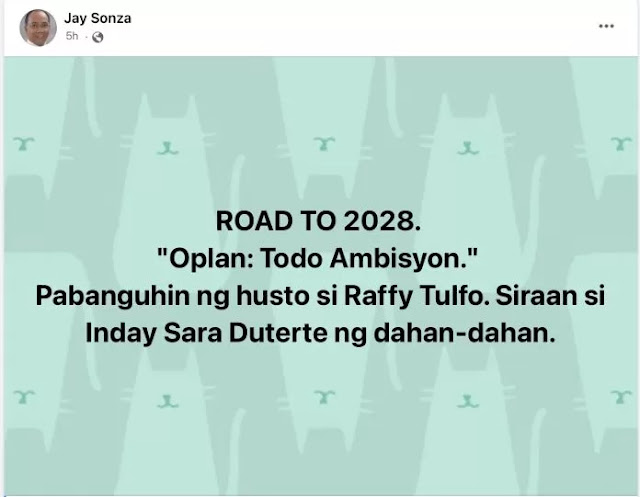 The issue exposed by Jay Sonza came out after the brother of Sen. Tulfo, fellow journalist Mon Tulfo allegedly keeps on criticizing the Vice President and DepEd Secretary Sara Duterte.

With this regards there is a huge possibility that the oppositions and supporters of Tulfo is grooming the journalist to aim for a higher position in the next national elections.

Due to the expose released by Jay Sonza on social media, netizens were quick to give their comments and sentiments regarding the issues involving Raffy Tulfo’s possible plans to run for a higher office.

There is no statement yet from the camp of Senator Raffy Tulfo and Mon Tulfo regarding the issue. Some netizens also accused that the Tulfo family are planning to run politically against the Duterte and Marcos family.

Beth Yamsuan: “No comparison talaga…Sara has proven her worth as a local executive even before she became vp and DepEd secretary…Tulfo on the other hand has only his tv show which borders on being a “maritess” to show for it. No way I would consider him. This early it’s Sara for me with Sandro perhaps as VP.”

Donna Lauron: Never again to Raffy, fooled us all. Why did he even deleted his video about supporting ABS-CBN? He is just another loren legarda, believe me.